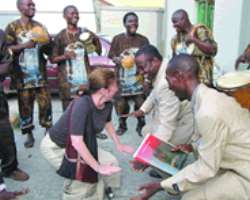 It was non-stop excitement and discovery for established and aspiring filmmakers at the maiden edition of the Gospel Film Festival (GOFEST), which held at the sprawling city of Ibadan from June 3 to 7, 2009. Just before you write off the four-day festival as equal to some that you may have witnessed in recent times, wait for this: it emerged from research that discovered the natural ability of Christians to produce great films that reflect their outlook to life, which, before now, was not exactly given the spotlight.

But that, of course, is not all. GOFEST is also on a mission of discovery, because its organisers feel the time is now to nurture and showcase Christian filmmakers and budding actors/actresses, give them the recognition that they so much crave, and highlight the resources that abound in the Christian film industry.

Viewed against this background, small wonder that GOFEST2009 set the stage for interaction among drama ministers; film producers, directors, screen writers, television producers, copywriters, film schools, media houses and international leading Christian filmmakers. Participants who trouped in to register were not disappointed at the end of the day, because GOFEST anticipated and met all their expectations.

In his opening remarks, Emeka Mba, director general of the National Film and Video Censors Board (NFVCB), could not have explained the rationale behind the event better: “…I am indeed very glad that the organisers will afford Christian film consumers a veritable choice which they have been starved of for so long.”

Next was Jarrod McNaughton, owner and president of McNaughton Productions, who spoke extensively on 21st century Christian filmmakers, was joined by Ituah Ighodalo, editor-in-chief, Timeless Newspaper and managing partner, Ighodalo and Associates, who let the audience into his dreams for the growth of the Christian film industry.

Day two was no less exciting, as Tunde Kelani's 'Life in Slow Motion' was screened, after which there was an interactive session which featured the discussion of topics like 'Nollywood and Its Glamour…Any Role Model?', 'Professionalism & Ministry'. On hand to spice up the session were discussants like Hyginus Ekweazi (former MD, Nigeria Film Corporation), Femi Odugbemi, MD/CEO DVworxs, Isreal Oreadewole, actor and producer, Elvon Jarret, actor and producer and Ayo Yoloye, MD, Freegift International. Each and every one of them bore their minds on the issue.

Since the day's event was a smashing success, not a few guests left the hall feeling it couldn't get any better than it already was. But they were in for another surprise.

Day three started with the screening of a Documentary on Ibadan, produced by Femi Odugbemi. It was indeed an exposé on the beautiful city, which has lots of 'firsts' to its name—the largest city in West Africa, the city with the first-ever television station, just to mention a few.
Then came the beautiful and intelligent executive director of Communicating For Change (CFC), Sandra Obiago, who regaled the audience with the topic 'Media that Matters.' True to type, she left no stone unturned, stressing that the “media is a powerful tool of communication and should be used positively to effect change in our environment, the nation and the world as a whole.”

Like day two, the day's activities did not end without another interesting panel of discussants, who bared their minds on “The Challenges of Christian Actors in Nigeria.” This was followed by the thrilling moment that everyone had been waiting for: the screening of the film by ace film producer, Kelani, called “Arugba,” a mainframe latest production. Everyone was literally glued to their seats as they watched scene by scene, the highly professional display put in by the actors and all. Behind the scene, Kelani, however, remarked that it wasn't all fun and games: “Though it was quite challenging to put the film together, it is good to know it came out well. My best is yet to come.”

The last day of the event was the icing on the cake. The red carpet display ushered in the movers and shakers of the Gospel Film Industry. The morning session featured Bola Adenuga, managing director of PEFTI Institute, who spoke about “21st Century Sinners.” Later in the evening, after the entertaining performance by various musical groups, actors were rewarded with numerous awards for their works. The film with the highest award, as put together by the panelists, was Ogun Adabi produced by Peter Kehinde Odeyemi.

It was at the close of event that Mike Bamiloye, president of the Mount Zion Faith Ministries International, was announced 'The Ambassador' of GOFESTIVAL 2010. In the estimation of Olaitan Faranpojo, festival director of GOFESTIVAL, “If the Christian filmmakers in Nigeria want to face the 21st century challenges, then we must create a story, legal and financial frame work within which our creativity can be expressed and protected, and use our messages to improve livelihoods in Nigeria.”

Though GOFESTIVAL 2009 may have come and gone, its organisers say yet another is waiting in the wings to accord Christian filmmakers and actors the honour that is their due. They pledge that it will all be done again at GOFESTIVAL 2010. Catch you there!