Tony Umez Nowhere To Be Found 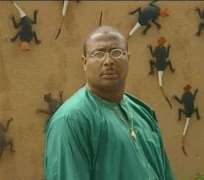 He is one of the most prominent Nigerian movie stars that has featured in many award winning movies. After keeping a low profile for sometime, actor, Tony Umez, has staged a big comeback in a modern family drama titled Nowhere To Be Found.

Umez, commenting on his involvement in the TV serials, noted that Nowhere To Be Found is a an entertaining programme that has all the qualities that make the drama worth watching.

“Honestly speaking, you will discover that I have not featured in many productions as you guys will expect lately. The reason is because I want to help build a better society through the way I utilise my talent in the entertainment world.

“So, when I read the script, and of course, coupled with the fact that it is being handled by professionals, I decided to give my best to it,” he said.

In the words of Moji Olaiya: “I'm optimistic that none of the drama and soap opera (both foreign and local) that are currently being shown on TV stations has content and professional touch like Nowhere To Be Found.

“It is full of action, suspense and it's intriguing. You just need to watch it.”

Since inception, AK Media Concepts, through its award-winning serials, has always shown keen interest in building a better Nigeria through entertainment.

According to the Chief Executive Officer, Mr. Benson Akintola Akindeju, “Nowhere To Be Found is a family drama with special treatment. It reveals many things that happen behind closed doors. It throws light on how the society affects the family and vice versa.”

The drama was showcased amid pomp and ceremony to the media on Thursday last week at the Lagos Airport Hotel Banquet Hall, Ikeja.

The guest speaker of the event was Mr. Elkanah Mowarin, the president of INTARPPAN, who spoke on the topic: Role of Independent Producers in Re-Branding the Nation.

Elkanah emphasised that producers need to portray the country in a good light in their different works of art.

According to him, a country like the United States of America is regarded as the best partly because its movie producers always show the good side of their country.

“It is not as if there are no beggars on the streets of US, but you will hardly see the movie producers showing it to us. Instead, they present the good side of their country. Our independent producers also need to emulate this,” he stated.