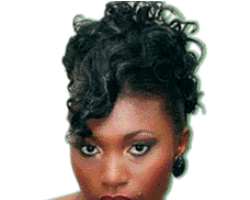 But the French graduate of the University of Lagos, who is famous for her role in Only One, Lagbaja's musical video and Glo Adverts says “there are some roles that I comfortably fall into, this wasn't one of them.”

The pretty actress opens up about her growing up years in Jos, Plateau State and how she handles her male admirers among other issues.

On the set of My Mum and I
It was a wonderful experience working with people who know their onions and who know their job. These are people who share the same vision with you and on the whole it was a lot more fun than work. We were like a one big family and I will do it all over again if I have to.

It wasn't easy initially because Lillian is a 38-year old mother and her daughter is 17 years old. There is a difference between being a mother and being a mother of a teenager, almost an adult. It wasn't easy but I had a lot of help which kind of put me in check and gave me all the courage and push I needed to play and interprete the role.

There are some roles that I comfortably fall into, this wasn't one of them. This was one I really needed help because I do not have the experience. It is one thing to watch others do it and it is something else to find yourself playing the role.

Facially, I may not be up to that age but there are certain things that directors look out for when they pick out actors to play certain roles, these are things that an actor may not know.

Background
I am not an actress by training, I studied French Language at the University of Lagos and I am undergoing a Masters programme in Public and International Affairs. I got diplomas and certificates from Alliance Francais, NIIT as well as Nigeria Institute of Management.

I have featured in a number of movies. I started with President Must Not Die in 2004 Saving Sarah, Desperate Billionaire, Emotional Blackmail, Italian Deal, Money Desire, Life and Death, Sound of Poverty. I must have featured in about 35 movies. I featured in two movies early 2004 and took a break to round off my final year exams and returned fully in 2005. I have spent five years in the motion picture industry.

It is not true that most artistes are not educated. A whole lot of them are first and masters degree holders. A lot of people don't know this aspect of artistes but there are so many of us that are educationally oriented and understand the need to groom and build themselves. The truth is that the arts industry is multi-faceted and at every point in time one has to be able to prove that he or she can handle things even outside of their own fields. I will speak for actors, I think a lot of us are educated in Nigeria.

Growing up in Jos
I couldn't have asked for something better. Although, I hail from Delta State, I grew up in Jos, Plateau State climbing trees and sometimes we used to go to Shere Hills to see monkeys and stupidly chase them. It was wonderful and I wouldn't trade it for anything. We lived very close to the Jos wildlife Park and so we used to go there every Sunday to enjoy ourselves.

Why I studied French
In Nigeria today we have people who studied Geography working in banks so I don't it is anything strange for a French graduate like me to make a career out of acting and modeling. I studied French just because I wanted to do it.

Unlike most of my peers, I continued studying French Language in my senior secondary school, it was something I had been familiar with all along before enrolling at the University.
I never nursed the idea of going into acting. It wasn't something I have been doing since birth but like every growing child, I also participated in drama programmes in the church. I was also a member of dramatic society at Federal Government College, Odogbolu where I had my secondary school education.

As a matter of fact, two years before I joined the industry, Zeb Ejiro had approached me and wanted me to act but I turned down the offer. But I had a change of heart after my third year when we had one whole year of strike period and I had to sit at home wondering what I could do with myself. After sitting at home for about six months, I had a change of heart and decided to give give acting a trial. However, before I got into university, I was already modeling. I featured in Lagbaja's video in 2005 but it wasn't released untill 2007, two years later.

Between acting and modelling
I don't like to compare, I started modeling before acting which took more of my time but from time to time, I go back to do stuffs for a few designers such as endorsements. Really, both professions occupy my life today. Of course, acting has been paying the bills because it comes regularly and with the bigger cheque.

As a model-turned-actor, I know that one of the movies that a lot of people would recognize is Desperate Millionaire which I featured in

My parents as fans
I had all the support of my parents. Unlike many young girls who shop for sponsors to compete in, I have never had to source for funds outside of my family. In the two mini pageants, four local, four national and one international pageant which I have competed in, I have never had to look outside for funding. Such was the support, I had from my parents. This is the reason why I can run home any time with confidence because I know I am covered.

Male admirers
I have been coping very well just like I cope with my landlord, lecturers, bus conductors etc. We are all human beings so one just have to have the 'coping' spirit.
I am not married but I can't answer if I am engaged because I want to keep some things to myself. My ideal man must be m-a-n!