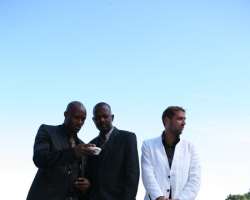 He's the true son of the soil, A Nigerian at least, which the Nigeria embassies across Europe always like to identify with. He's a household name in Europe especially, in Nollywood department. His name rings bell within African in the Diasporas except to the new comers. Only those who are new do not know or have not heard of the Cultural Ambassador awards winner; Isaac Izoya of Ehizoya Golden Entertainment

In a dream come through for the young man who initiated the tour of Europe with Nollywood stars since 2003, he recently played a sub-lead role in a multi-million euro movie titled; ABSCHIEDSTOURNEE; The Final Farewell alongside Hollywood, Germans, Cameroonian, Angolan, Irish and British stars among whom are Silvio Neubauer, Annabelle Munro, Stephan Hanna Mark Stanley among others. The controversial movie exposes the money launderings techniques of the treasure looters from Nigeria to Europe's which is perpetrated by unscrupulous Nigerian politicians through their European based agents.

The movie which is produced by Pfanderfilm GmbH in honour of acting living legend Rolf Eden, a top notch actor of German films who is retiring at 79 yrs, opens a new chapter in Europe film industry by revealing the Nigeria deadly Mafia connections that can smell sensitive dangers even in disguise and walk away unharmed without trace irrespective of the modern day technology as compared to the Italian or Russian mafias.

The movie starts in Berlin and ends in Cannes where the artistes were subjected to the rigours of international production.

In his words, Isaac Izoya said it was a great opportunity to work alongside international mega stars for a common purpose for the benefit of the masses. I saw a relaxed shooting even while under pressure. I saw how directors worked to bring the best out of actors without shouting like you see in Nollywood where director see themselves as all and all and could scream actor's down to earns their respect or dominant control. I also discovered a new potential of creativity in me. It was a different ball-game. I felt great when cameras faced me with all white crew running behind me with so much attention focused on me attracting so much attention around me. I remembered when a member of our crew came to me and said Isaac, some girls were asking with great curiosity about whom you are and I told them that you're a Nigerian Hip-Hop star playing gangster role in our movie. Why Hip hop star? Why not nollywood? I asked him. 'I don't know but that was what came to my mind at that particular time because you dressed like one he replied. On the whole I was honoured when Hollywood star, Annabelle Munro from New York told me, Isaac, I'm proud of you, just buy my ticket and pay for my hotel and I will be there to assist you in your next production any where in the world. I never heard about Nollywood before but with what I have seen in you so far, I must say that I'm impressed with Nigeria.

Continuing Izoya said In my candid opinion based on my experience in this production, I'm convinced that Nigerian stars will represent any day any time any where when given equal opportunity. We're creative, flexible and smart which are some of the qualities require to get to the top.

While he was in the production camp pre-occupied with the production, he was still in contact with the Nigeria embassy in Paris planning for his Annual Europe tour summer with Nigeria stars in his undying effort to re-brand Nigeria image abroad. The showbiz promotion job that has earned him several awards, both in Nigeria and Germany continues in July with Mrs. Palmer Omoruyi (Gospel musician from Benin whose popularity both home and abroad could only be compared to that of Mama. G) and Comedian Shakara and Fred Iwenjora, vanguard journalist. When asked why there is no Nollywood star on board this time he said, out of sight is out of mind. The reduction of Nollywood film production is also affecting the interests in Nigeria film stars by fans. The regular faces in the few films these days have been on our tour already. We don't make the choices; we're just instrument used for pushing people's dreams through. We're giving the fans what they request for. Request without Nollywood stars is a confirmation that the film industry is a dying industry that is currently crying for help. Music seems to be in vogue and the Government or Censor's Board have to wake up to rescue Nollywood else, the gods are not to blame.

Mr. Izoya - who believes artistes exposition are veritable vehicles of influencing humanity, culture and the people's mentality has personally sponsored prominent Nigerian artistes on European tours. Some of the artistes who have been on such tours include prominent people like Patience Ozokwor a.k.a Mama G, Ngozi Ezeonu, Empress Njamah, Nkeiruka Sylvanus, Jim Iyke, Ramsey Noauh, Mercy Johnson, Benedict Johnson, Comedian Gordons, Desmond Elliot, Chinedu Ikedieze and Osita Iheme a.k.a Aki and PawPaw, John Okafor (a.k.a. Mr Ibu), Victor Osuagwu (a.k.a. One Dollar), Bright Okpocha, popularly known as Basket Mouth, Julius Agwu, Francis Agoda a.k.a I Go Dye, Mike Ogbolosingha, Sheddi Baba, Producer/director Lancelot Oduwa Imasuen, Taiwo Oduala Kayode Peters and Charles Inojie to mention only but a few. He has also starred or produced some of the Nollywood successful movies like; Sinners In The House, Final Solutions, My sister, My child, Love In Berlin, Run!...But You Can't Hide, Zero Your Mind etc, etc.

Suffice it to say that if it is true that Information Minister really need a foreign partner to work with in RE-BRANDING NIGERIA IMAGE abroad, please, go and partner with Isaac Izoya. His track record speaks for itself.

More pix in our photo gallery