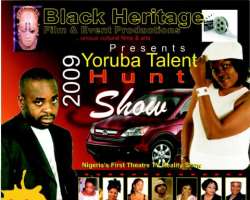 With the flock of TV reality shows that has come and gone, never has it occurred to many Nigerians that the theatre is the bedrock of entertainment. Black Heritage Film & Event Productions now sets the pace of taking the Nigerian Entertainment back to the basses by setting up the Yoruba Talent Hunt Show 09, Nigeria 's First Theatre Reality TV Show. Taking us back to the days of Hubert Ogunde,Ola balogun,Ade Love,Ogunmola,Baba wande and Ogunsola etc who pioneered and promoted the theatre productions in Nigeria in the early 80s.

The Yoruba Talent Hunt Show 09 is geared towards awakening the theatre spirit in Nigeria . It's set towards encouraging the stage productions and giving the theatre arts graduate the opportunity of displaying their skills to millions of Viewers. The event would be taking place in different parts of the Western Region of the country eg Lagos , Ogun, Oyo, Osun, Ondo, Ekiti and Kwara State .

The event is not restricted to Yorubas only but to as many Nigeria Youths who are able to speak the Yoruba dialect. The participate will be camped at different camp grounds to be disclosed later as they will be undergoing various auditions and tasks which covers aspects of performance such as dance acting, singing, scriptwriting and the likes.. T

he event will be facilitated by a Yoruba movie star who is also a thespian and the judges as well, those who have made a mark or more in the Yoruba movie scene and are Thespian as well. The event can be sponsor by State Governments and co-operate bodies and will last for 6 months. In each stage of the event, participants are evicted by public votes as well as the Judges. And then grand finale. prospective participants are to obtain their registration form and pay to any of the Two Banks: Oceanic Bank Plc And Afribank Plc. Auditions will take place in all the western region states of Nigeria. Lagos,Oyo,Ogun,Osun,Ondo,Ekiti and Kwara state. Registration is Open from June 1st - August 31st,2009.

The sales aim of this print is to promote the Nigerian Culture and Heritage and also revive the thespian spirit across the country. The event will be taking place annually as this is its maiden edition.