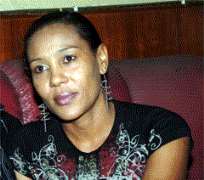 Shan George has from all indications reunited with her estranged younger lover, and the two seems to be having the best of times.

Klieglights caught the duo at a hangout, where they had apparently gone to have fun, and they just couldn't help being all over each other. The lovebirds just couldn't keep their eyes and hands off each other.

Though they arrived the place in the wee hours of the morning, the two took out time to pose for pictures with fans and friends - an indication that their reunion isn't false.

The half-caste mother of two boys met and fell in love with her lover many months back, and the two have been waxing stronger, even with the failure of Shan's music career - which generated a lot of noise when it was about to began.

Marriage may not on the cards for the lovers, but they don't appear ready to part ways anytime soon either.