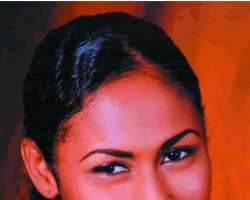 She is young, brilliant, pretty and is making waves in the Nigerian movie industry. Olayinka Olukonga is a gold- hearted girl with a vision in the entertainment industry. You can't miss her face when you watch Super Story, a soap opera by Wale Adenuga, and she is greatly admired by viewers and lovers of this programme.

She comes from Lagos State and also an under-graduate of Marketing in the University of Lagos. The charming Indian looking girl, who was used in the popular Visafone advert while celebrating her birthday, has launched a children's foundation for the motherless and the underprivileged. In this interview, she unveiled her life style to http://nollywoodgists.com.

Acting
I started acting not quite long, but the roles I have played so far have brought me to limelight and it now seems I have been acting for ages.

Inspiration
I was not really inspired by anyone. The truth is that I have passion for entertainment. I love affecting lives positively.

Role model
There are just few actresses that I appreciate much. By the grace of God, am looking forward to be like Joke Sylvia, Kate Henshaw and Stephanie Okereke. I even hope to do better than them.

Profession
Acting is a rewarding profession but it requires patience, endurance, tolerance and prayers. Without God's connection, it may be difficult for one to make it. It also requires one to put in her best. It is not what one can do non-challantly.

Aside acting
As I told you, am still in school. I don't want my attention to be divided but all the same, I set up a foundation for the underprivileged children. I will be giving it much attention, then when I graduate I will face life squarely.

Works
I will just speak on my role as Nnenna in Super Story of Wale Adenuga production. It was a role I will not forget easily. I was killed by my father's best friend who also killed my father just to inherit the family's wealth. Then, because I did not die a natural death, I was coming out and met a boy whom I made my friend and through him I was communicating with my family. I started revealing his plans against my family to Akin and with that my mother and two brothers were not killed. It was really an interesting story.

Growing up
My growing up is a very interesting one. I have caring and loving parents who took time to bring me up in the fear of God. I grew up not knowing lack; I was properly taken care of because my parents believe that we are their responsibility so they tried so hard to provide for my siblings and I.

Background
I have a good background. I come from a family of four, and I am the first. My father is a disciplinarian and he made it compulsory that I must read. My parents are into business. My family is of average class and we have a happy home.

Uniqueness
I am unique in my own way. God gave me a cheerful dispossure. Nature made me to be smiling always and people note me for that easily.

Before acting
I have been modelling and doing little jobs here and there until two years ago when I went for auditioning at Wale Adenuga Productions where I got the role of Sunita on his popular soap opera, Papa Ajasco. Last year, they called me that they have a script for me, I collected it, read and then shot.

Exposure
Nnenna in Super Story gave me the most exposure. Since after playing that role people, both children and adults point at me anywhere I go. They express their love and likeness and they also encourage me.

Modeling for Visafone
Actually, the advert came out six months before Super Story. I had an agent, Domino who invited me to come for auditioning for Visafone advert. I went and I was eventually chosen.

Vision
In a couple of years I hope to achieve a lot in the entertainment industry. I know that my name will ring bell and I will go to places even outside the country. Most importantly, I will have a lot to do with children especially the underprivileged and the motherless who do not have anyone to encourage and give them faith and hope. This was why I set up a foundation as a means of inculcating in them the idea of believing in themselves and having a positive mindset.

Funding
It's a gradual process; Rome was not built in a day. I know that it is not easy but with God all things are possible. This is why I am grateful to my parents who wholeheartedly are solidly behind me. I thank them for helping me actualize my dreams. I have not gone to anyone to solicit for fund. For now, I am just doing the whole thing. What I intend doing for now is that every children's day, any money realized from Nnenna's show will be given to the underprivileged and the motherless babies.

Challenges
There are a lot to manage, trying not to hurt people and trying to make things right. There is also a challenge of being restricted to go to places just because one is a public figure.

Memorable day
It was the day I launched my foundation, which was also my birthday.

Regrets
I don't have regrets. Any negative thing that happens to me gives me an opportunity to learn and to prevent a recurrence.

Roles
I don't accept all roles. If I get a script that requires nudity, then it's not for me. I am in charge of my life. No one dictates what I should do.

Relationship
Well, I am not into a relationship now. I am still too young to think about that. When the time comes, I will consider having one.

Managing advances
There are not too many men that come but the ones that come I handle them my own way. What I have most are fans who call to appreciate me, encourage and express their love for me.

Why too many men don't come to her
Forget about the person you see on television, I am too young to allow men ruin my career. Those that have conscience know that I am too young. Those without conscience come but they don't succeed. I only maintain fans that mean good.

Sexual harassment
No, I have not experienced it and will never do.

Advice
In whatever you do, put in your best and allow God to do the rest. Have a positive mindset, appreciate people even when their best is not good enough and most importantly, look unto God