We Didn't Expect Yori Yori To Be A Bang -Bracket 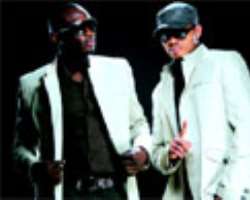 Ezioko Nwachukwu and Obumneme Ali, who go by the stage name 'Bracket' are easily known for their 'Yori Yori' hit track that is currently making waves within the entertainment circles. The duo, from Enugu State and students of the same school, University of Nigeria, Nsukka, spoke to REPORTER, Ifeoma Meze, on how they started, the philosophy behind the track 'Yori yori,' among other issues. Excerpts:

You guys suddenly took the music world by the storm. Even then not much is known by many about your personal details.

My name is Ezioko Nwachukwu. I am from Nsukka Local Government Area of Enugu State. My stage name is Vast. I am still in school. I am studying Mass Communication in University of Nigeria, Nsukka. I am hoping to graduate anytime from next two years.

I am Obumneme Ali. I am from Udi Local Government Area of Enugu State. I am known on the stage as Smash. I am also in the same school with him but studying Psychology.

How did you guys meet?

Vast: We met in university school show. Though we had not gotten into the university then but because we are gifted in the sense that we used to miming other people's songs like R. Kelly, Tupac and other American artistes just for entertainment. Then they used to call us; paid us small amount of money for us to come to mime. That was how we got to meet. We were three before. I met the third guy, Amobi Clement popularly known as Bisstog, who is no longer with the group due to some reasons, before I met Obumneme. When we, Amobi and I, met Obumneme, we asked him to rap for us and we liked his pattern of raping because then the kind of music we did mostly was rap songs but because of Nigerian market we had to switch to singing. So that was how we met.

What happened to the third guy?

The third guy left. He said that he didn't want to combine education and music. He is in Electrical Electronics Engineering in the same school, University of Nigeria, Nsukka.

Is he likely to come back to the group?

That is what I don't know for now.

How has the group been since he left?

As you can see, God has been on our side.

Did it ever occur to you guys that 'Yori Yori' track would take you this far?

Smash: We have always hoped that we would get to the top one day, starting from the day that we did our first song Happy day. Though it did not go that far, when we went to the studio to do another job we were hopeful that at least we would get to a certain level. But we never expected that Yori Yori will go this far but we had that feeling that it was a bright and good job and that it would sell but not really up to what we are getting now.

Is there another track in the album that you think that would be better than Yori Yori?

The one that is picking up seriously now is No time. That is the number two track in the album that we did with P-Square. Number four, Ada Owerri, is receiving enough airplay in Lagos. We have other slow songs like wrong thing and leaders of tomorrow. People fall in love with them when they play.

What inspired you guys to do the track? Yori Yori?

Yori Yori was born out of the love we have for everybody who has been there for us starting from the days of Happy Day. It does not really mean that we sang it for a particular girl or a particular person. The media, which have always been there for us, are involved. It was inspired by anybody who at least contributed in one way or the other during the days of Happy Day. That is why we did that song to appreciate them for all the good things they did for us and also for the support. We had to do it as a love song pattern so that Nigerians would appreciate it easily. A guy can play the song for his girlfriend and likewise a girl too. That was the market that we were looking at but the story behind the song is that it is for everybody that has made us come this far.

You guys were once rappers, are you likely to do some rap music?

Maybe in our old age after making our money. What we are based on now is singing and making hit tracks that can move the world, fetch us money, shows and endorsements.

So, for now, rap is sleeping?

Yes, for now rap is sleeping. It is not that rap is bad or that it does not sell in our country but I don't think the kind of rap we do would sell. I believe singing is what we can do better.

How did you guys find out that singing is what you can do better?

Because of Happy Day, our first single. It was strictly singing with a little rap of eight lines.

Why do you think Happy Day did not really sell?

What challenge have you been facing in this career?

It has not been very easy especially in the aspect of our education. It is very difficult to combine music and education. For example, you might have an exam to write in Nsukka and a show to attend at Abuja. It is quite tasking and challenging because you cannot be in those two places at the same time. But we still cope well.

So aside education, you don't have any challenges again?

Smash: I don't think so. Other challenges like getting a sponsor, we sure passed through that when we were starting. But by God's grace, we have passed that stage now. We are very thankful to our sponsor, A-Planet, today he is happy for what he helped us for.

So there are no challenges coming from the female fans?

For female fans, that one is certain but being the king of people we are, we are in control. We control ourselves when it comes to that side. They are not really a problem because we have back up and that back up is God.

What would you say about the kind of music we have these days?

Vast: I can give it 70 percent. We are trying though we have a lot of artistes in Nigeria that are not really there. Generally to entertainment in Nigeria, I will give them 70 percent because we have really grown from what we used to be.

What about the morals of our younger generation, do you think the kinds of music we have these days are music that can corrupt kid?

I don't think so, because any song or video goes through a censor's board and if they are not really good for public consumption, it will be banned from viewing on TV stations. Nigeria is really trying but the only thing I think they cannot control is piracy.

Piracy is uncontrollable. Everyday it grows worse. As days pass by, we see new kind of piracy. Once a marketer gets hold of your work, he bargains with the piracy people a huge amount of money. And that is why it is uncontrollable. If only marketers will stand on their feet and say no to piracy then we have taken one step to fighting it.

Is there any form of advice or what you think that should be done to help cub piracy?

There is one truth that people hide that as a musician, you have to do a tight song, a song that can touch every nooks and crannies of this country. After that, wait for your endorsements and shows. Don't depend on what marketer will give you. But you must give the album to a marketer at any amount of money. In a way, piracy helps to spread your music to places you never imagine your songs can go but the problem is that someone else reaps the fruit of your sweat.

This is a kind of advice to up and coming artiste. If you do a very good music, relax, go to any station that you feel can accept you, drop it there for it to be played, before you know it, people will start asking of you. People will give you endorsements, shows and even sponsors. By the time you do your second album, you can sell it any amount you want. They should not look at the faces of D'Banj, P-Square or 9ice. Just focus on doing a masterpiece as a song that would bring you out and you are already there.

If your song is not good, they cannot pirate it because they will loose their money. But if it's good they will push your work to any level and in a way it boosts your profile and recognition.

Do you guys miss the third guy in your group?

Yes. But we have moved on now.

What if he comes back to join the group?

He will definitely come back to face his music, but I don't think he will come back to join the group. He will be doing his own thing.