Eddy Brown: My life, my music, my marriage 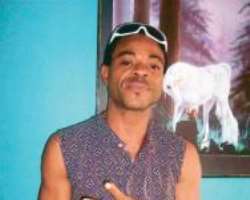 Can any good thing come out of him again? Nothing will be heard of him again. This is the end of his career. His career automatically is dead."

These were some of the numerous statements people made at Eddy Brown, a member of the Remedies when he left Kennis Music. Many, as a matter of fact, felt his career was actually dead but this guy who at a point in time had media war over his crashed marriage took everyone by storm last Thursday at Showtime celebrity night-out when he literally worked the guests off their seat with some of the hits of the just reconciled group (Remedies). He even spoke on his career and the coming back of the Remedies group.

His sterling performance was hardly surprising. Eddy Brown, the estranged husband of Kenny St. Brown (KSB), is not a green horn in the Nigeria music industry. In fact he prides himself as the pioneer of hip-hop in the country by bringing together the remedies group, which comprised Tony Tetula, Idris Abdulkareem, the Jaga Jaga crooner and himself. When the group first came out with the hit sako mo in 1999, it was an instant success. All seemed well for him and his career flourished before he left Kennis Music. In an ironic twist however not much was heard of this father of two, except scandals.

Why did Brown take a break from the industry Daily Independent enquired? Passionately he said, "It is funny how people rate people. For me I just took a break from everything. I have had a lovely time in my career. I was the first to revolutionise the Nigerian music industry by creating a group called Remedies and with that I give myself a pass mark because that alone is an achievement. I am just blessed by God to witness the success of what I started. It is 10 years now since we started and I am proud of the industry and I am still alive doing well in my career. I have been doing shows and many people thought my career is dead just because I have not released any album."

Still on why he has not been to the studio to record for a while, he added that he has not released any song for a while because he wants to come out with the best. According to him, "I took a break form recording because recording is not an easy task and you have to do it from your creative mind. I know my strength and I don't think I should give my fans a miniature of what I can actually do. I took a break so that I can concentrate more, re-focus and re-package myself and that is what I am doing this year."

He is actually working on an album titled Sentimental. The title of the album according to him came out of his experiences during his ordeals.

"We are on air promoting the album, and in the next two weeks the album will be out. The first single is called 'sentimental.' It is just about how some people have made me feel in my ordeal and I was able to categorise everyone as human beings. In the midst of everything that has happened to me, I have been wrongly judged. The song is just to tell people how I feel and about my real person. I have not really changed except for the fact that I am mature and I am a peace loving man," he said.

The good news about the long estranged members of the group is that they are coming together to release an album. "The Remedies have been recording and we have not officially announced our coming back. We are recording an album and we hope to release the album this year after my album is released. We started recording last year. We have done about four songs now. There is something unique in the box from the group. Our fans have been waiting for a long time and we want to give them something very good.

"A lot of companies actually have been asking for the re-union package of the group because they felt God has given us the grace to perform wonderfully well. With our maturity, we see a lot of financial opportunities. The group is a formidable group because we are the pioneers of hip-hop in Nigeria. As pioneers, if we are going to come back it should be a total package. It is not just about recording an album but recording because we have the stuff," he said with pride.

Are the group back solely because of financial gains? Brown retorted, "We are not just back because of the financial gains but because our fans have been craving to see the re-union of this excellent group. People keep sending mails to me on a daily basis asking me when the group will come back. Our fans are passionate about us and so we felt we should come back. Despite the fact that we have all gone solo, our fans still attach the love they have for the group on each of us and to me that is a feat. What I know is that we are very much mature now, and we are all married. I am separated from my wife and we are all focused."

Brown, who seems not to understand why the success story of Remedies is solely ascribed to Kennis Music, said the group had recorded success before Kennis Music discovered the group. "I think they thought Kennis Music was my life and it is wrong for anybody to have that notion because where you work is not your life. It could be part of your life but it is not your life. I want to tell everyone that Kennis Music was never my life because I had met Souls Music before I met Kennis Music and then we had wonderful time with our managers, Gbenga Awe and Gboyega Sotunde. I prefer to give kudos to people like that because they were our backbone when we started.

They equally nurtured us. After a year of our success we struck another deal with Kennis Music and took over from where Soul Record stopped. We have Steve Kadiri who discovered the group what will be said of him when all the glory is ascribed to Kennis Music. Kennis Music is good because they are a very good recording company. They have done their best and other people are coming up to take over from them because there is a revolution in the industry. I am an achiever because the D'Banj and others came on stage through my revolution. With that I count myself as a rich man because I put food on their table with my brand of music. We created afro-hip-hop and it blew up to be what everyone is enjoying now. Our music changed the industry," he stressed.

The group, according to him, was formed when he met Idris at Offa, Kwara State, when he went for a solo show with one DJ Shina. After discovering that Idris was a good rapper, he lured him to come to Lagos since he (Brown) was packaging an album. After about two weeks that he had to record a jingle at Ray Power, Idris brought Tony Tetula along with him and Brown instantly accepted Tony because of his aura. Not minding that Tony was not a big name in the industry then, they all started singing together and the rest as they say is now history.

Still priding himself as the man who brought a change to the Nigerian music industry, Brown said, "When we came out, we weren't making so much money but these days everyone in the industry is smiling to the bank. Music business has changed now because there is more packaging."

This versatile artiste who has four artistes under his label seems to be wiser now as she confessed that she learnt lessons during his ordeals. Among the lessons he claimed to have learnt is patience.

"I learnt to be patient in all that I do. I think those people talking about me should get close to me and know who I am, rather than talking ill about my person. I make people happy with my song and so I am not what they think I am. Everything I do reflects in the kind of music I play and this day I am preaching love. I have got over that because I now concentrate more on my work. I have crossed all the challenges I faced in the past. I want to bring myself back to where I rightfully belong," he said.

Ever since his celebrated marriage with KSB hit a brick wall, some people have come to label this man as 'irresponsible' alleging that he does not take care of his two children, Edwina and Kennedy.

Brown, who was shocked when our reporter asked him this, furiously said "Really? How do they get their record? Anyway, I am passionate about my kids, Edwina and Kennedy. I was born by a father who took good care of me and so I have to take good care of my own children. It is absurd for anyone to come up and say I am not taking care of the kids. To me, that is absurd and cruel. You need to see my kids and you will see me glowing in them."

All through the interview, he kept referring to KSB as his wife but when he was asked if just as the Remedies came back on stage KSB might still come back into his life, he philosophised: "I will only leave that to God. I like peace and it is different from what I have been painted to be. I like peace of mind and that was what I had when we came out in 1998. God led me when I said yes to marriage and I found out that marriage was a big challenge and I had to learn in the process just as everybody have learnt it too. My failed marriage is a learning process."

Still curious if he would give the union another thought if eventually everything is settled since KSB also seems to be more matured now considering the fact that she claims to be an ordained pastor in her church and the children/youth pastor of her church, Brown, with a prolonged laughter replied "I am not aware of her being a pastor or teaching youths in church probably because that was not the woman I married. But there is a knot tied sometimes back and so we are still tying the knot. I am a Christian. Until the day God separates us, we are still married. But for now, we are separated. We are still married, I have my marriage papers and she has hers."

The act, who told our reporter that he still wears his wedding band, however noted that they are still friends because of their children.

"We have always talked because we have to talk about the children so that we plan for the children. We mostly talk on phone and we see during the weekends when I have to pick up the children because I pick them every weekend," he recalled.

To his fans and those who thought the end has come to his career, Brown didn't end the interview session without saying "I never quit anything I start. I am a musician and that is why I am still relevant till date. I am a complete musician because I am a producer and a songwriter. So my future in this industry is very bright."