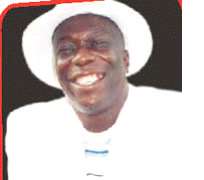 The production of Magical Lens Pictures sees Awurum who made himself popular in the movie, Ekulu singing and dancing in the name of the EFCC which he makes into a parody of sorts. Awurum makes an instrumental version of the title track, EFCC and when 'I go love you' asked why he went into musical comedy, Awurum explained that “I have always been involved in comedy one way or the other even though I have done more serious acting. I looked into the activities of the EFCC and I am convinced that they are doing a very important job if our country must change status quo as one of the most corrupt nations in the globe. In that vein I reasoned that if every Nigerian is investigated, every face would have one way or the other committed one crime or the other. The comedy production is all the more important now that Nigeria is re-branding for the better. Just tell me why should a government official misappropriate money meant for the development of the country or covet it for himself or herself? A lot of people think that the EFCC is not working but I think differently.

I would love to thank my friends like Mr. Ibu, Victor Osuagwu, Dauda Kingsley Ogbonna and Uncle Sam Loco for being part of what we did. They were all in Enugu as the production lasted and contributed their quota.”