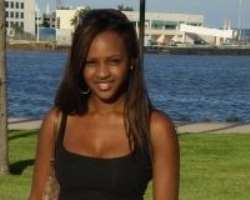 Caroline Okorie, the unassuming UK based actor whose versatility in the theater environment in London and beyond has been commendable by her fans is poised to surpass the existing big names in the movie industry with her acting prowess.

The up and coming actress, Caroline, has taking part in numerous theatre productions and educational documentaries, these include the Channel 4 documentary 'GET Rid of the Royals to mention but just a few.

Aside the fact that the upwardly mobile Caroline who is also making sway in the modeling corridor with her intimidating statistics has spent time recording materials in the US and has been cast in a soap by AMPA titled 'In The Salon', she is so passionate about Nollywood.

The politics graduate of Queen Mary, University of London has just returned from South Africa and Ireland, we gathered, where she is been making unprecedented success with her acting career. We shall unveils the mystery behind the success story of this drop dead-beauty soon. Watch out.