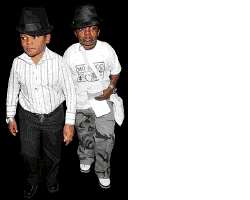 The two actors – who are adored by millions locally – were received by screaming women and a large crowd of Nigerians living in South Africa.

The tiny actors are stars of popular “Nollywood” movies such as Baby Police.

The police had been called by the organisers who struggled to control the crowd that pushed to get a photo of their favourite actors.

In less than a minute, the two diminutive film stars disappeared and police escourted them to a Nissan Navara.

The crowd stood outside demanding to see the stars but police and organisers decided it was best to leave.

The pair are in the country for a comedy show called Laugh Unlimited that takes place at Wembley Arena on Saturday.

This is the first visit by the pair to South Africa.

Among other entertainers on the bill will be L'vovo Derrango, Kelly Khumalo and Ashifa Shabba.

“We are happy to come to South Africa when there is so much excitement about the 2010 World Cup,' said Ikedieze.

Other than attending the comedy show, the actors wanted to prove to their fans in the country that neither of them was dead.

A rumour has been circulating that Ikedieze died more than a year ago.

“We wanted to come here to show our fans that neither of us is dead,” laughed Ikedieze.

“We also really appreciate the support our fans have showed us over the past decade,” he said.

“I would also love to see Mandela,” he said.

When asked about the criticism they receive about the quality of their films Ikedieze said: “The Americans, the Japanese, and the Indians were criticised when they first started out in the film industry, so it is not a big thing.

“Let the people come and experience dance, fun, music and art,” he said of the comedy show.

The two men refused to reveal their ages.

“I cannot reveal my age, but I can tell you that we are both adults,” Ikedieze said.