‘I don‘t use any memory-enhancing charm’-------Ojo Arowosafe 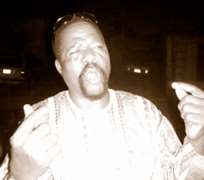 Ever dripping with charms and incantation whenever in action, Ojo Arowosafe occupies a unique place in the Nigerian movie world. His words are meant to be fire. If he fires a single shot, about 10 heads are expected to be rolling on the floor. Yet, if he is shot at by 10 people, the enemies' bullets dissolve into mere rain drops that end up caressing his magical skin.

Such is the theatrical fame of the Igbara Odo, Ekiti State-born actor, who earned his popular stage name, Fadeyi Oloro - the stinging offspring of Ifa - from the fierce anti-hero role he played in old Yoruba television play, Arelu.

Since the 1980s when the drama produced by Jimoh Aliu shot him into limelight, Arowosafe has acted in many films, usually in the same belligerent and one-against-the multitude realm. His customised painted face and charms-covered costume apart, what appears to be his greatest strength is the ability to launch into an endless round of ofo, the Yoruba magical chant with which the chanter sends various kinds of messages to others, with the help of some invisible but efficient power he invokes. Incantations can convey prayers for good things like money and honour. But in most cases, Fadeyi is soliciting the fall of some real and imaginary enemy.

But while he is such a sadist in many films, the Arowosafe that our correspondent encountered at a relaxation joint in Lagos recently is a meek fellow. But for the ease at which beer and chicken pepper soup sailed down his throat, one could have said that he is the type that can hold cold water on his mouth probably for up to seven days. More important, however, once he has discarded his costume, he exudes friendliness as he reflects on his acting career, and a fire accident that put his life on the line in 2003. Based on the uncommon power with which he vomits incantation, one could think he uses ogun isoye, the memory-boosting charm that, many believe, still exists in certain quarters.

”Me?” he expresses surprise at such a thought. ”I don't have any kind of charm you are talking about. No way. I am not a child of a medicine man. And I have no godfather anywhere. I may be that prolific whenever I am chanting incantation, but I don't rely on any artificial power at all. It is natural with me. As we are sitting down enjoying ourselves here, let someone just come and say: 'Fadeyi, I have a job for you.' Once I put on my mask, even you too will not be able to come near me again, because everything about me would have changed. It is a product of training and experience.”

Such pedigree, Arowosafe adds, has earned him a lot of honour. Ironically, however, it has earned him the ire of people who obviously think he is as wicked as he acts in most plays and films. He recalls how he was nearly lynched in Osogbo, Osun State at a time.

He notes, ”When the people saw me, they said, 'Ah, we have caught you today.' They wanted to stone me to death. I quickly held a dialogue with my leg and dashed into a nearby house. Thank God, the landlord and the entire household cooperated with me. They gave me a woman's dress in which I disguised. Even upon that, when I got out I started behaving like someone with physical disability. The trick was gong to work until a small boy cried: 'See him! That is Fadeyi Oloro going.' Now. I had to throw away the disguise and run the race of my life. It was the second day they brought the bus I drove to Osogbo to Lagos.”

Asked to reflect on the era that produced Arelu, Yanponyanrin and other Yoruba classics, Fadeyi explains that it is good that he was part of the treat then. He, however, notes that all the era gave him and his contemporaries was fame, and not money. According to him, what they got from such productions was close to pittance as it was the producer that got the bulk from sponsors. But then, the film season has largely made up for the losses of the past.

Depending on the enormity of the role he is expected to play, Fadeyi takes an average of NI00,000. He has taken more - up to N150 - but he can be so flexible that he can take far less, especially when he is working with a young producer with a low budget, who he feels he needs to help. But where he has really made fundamental gain is his own productions. While he is working on a Galaxy Television-sponsored Ote Nla - Great Battle - at present, he is working on three of such - Alagbada Ina, Asoju Eledumare and Sese Efun Meteeta.

Among his other works, Adedogun remains particularly memorable to him. Apart from being the one that sold most, it was the film he was shooting when the fire incident occurred in 2003. Unlike what many people believe happened to him on location, Arowosafe reiterates that it happened in his house.

”I wanted to load gunpowder into my gun,” he recalls. ”Come to think of it, the gun powder was wet. But when I stuffed it into the gun, it sparked fire that immediately enveloped me.” He further recalls that although he spent almost all his fortunes in the hospital, help came from quarters he never even expected it could come from.

”From different parts of the country, from London, from US etc, people showed interest and gave support. Honestly, the incident provided me with an opportunity for sober reflection on life, and on my adventures so far in the acting industry.”