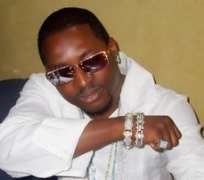 If the stories reaching us is any thing to go by, Olu Maintain now swims in mega millions

According to our source, Olumide Edward Adegbolu, aka Olu Maintain, made the new wealth from deals in the Arab world but the source of the wealth has been generating controversies lately.

It was gathered that while many believe that Olu Maintain is involved in shady deals known as 419, some others believe he made so much money from record sales, endorsements and shows.

Those who are in the know claimed that after the noise of Yahoozee was naturally going down, Olu's a finance was also taking a downward plunge.

As faith would have it, Olu was limited to some Arab countries by a firend and while there, Olu was said to have got involved in some deals which fetched him a lot of money.

It was gathered that the money which are in dollars was so much that he rushed to UK to buy himself a luxury property and another in U.S.

Some people who have listened to his new song Arab money, which is currently burning the airwaves believe that it was because of the deal he made in Arab that he sang the song.

When contacted on the story, Olu said he has never done crime before and he is not ready to start now. He stressed that during his trying times, he had the opportunity to do crime but he did not.

Olu started his music career in 1992 but became a recording artiste in 1998 and debuted as a solo artiste with Yahoozee.