Why we play ‘small boys’ in movies –Aki and Pawpaw 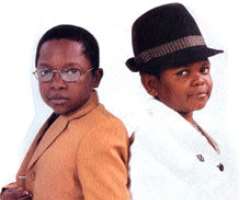 A couple of years ago, the duo of Chinedu Ikedieze and Osita Iheme took Nollywood by storm with their maiden appearance in the popular movie; Aki Na Ukwa. The two diminutive acts introduced a fresh slant to comic roles in indigenous movies with the creation of two naughty kids that are full of mischief and pranks.

But while some critics perceive their roles as being misleading to viewers, particularly children, the movie stars stoutly defended their roles. They argued that rather than glorify certain undesirable traits in children, what they have always done was to draw parents' attention to their children's likely pranks and antics.

The artistes who have featured in such movies as Two Rats,Tom and Jerry, Magic Cap and Jadon also spoke about their plans to settle down. Although Chinedu was recently linked to a botched marriage, he denied his involvement in such an affair, just as Osita admitted that tying the nuptial knot is not the next thing on his agenda.
Daily Sun cornered the two acts on a movie set in Lagos and they took time to speak on their career and other issues:

How we joined Nollywood
CHINEDU:I came into the industry in 1998 as an actor. I had the desire and enthusiasm to be like the people I watched on television. Initially, I lacked courage to back up my zeal. But given the deep admiration I had for actors and my immediate environment at the Institute of Management Technology (IMT) Enugu where I studied Mass Communication, I decided to combine my course with acting. This was what actually lured me into Nollywood.
OSITA:
I came into Nollywood in 2001 out of my love and flair for acting. I used to be a member of my church's drama group in Christ the King Catholic Church in Aba. I enjoyed watching movies and that triggered my interest in the industry and I can say that acting is my passion.

Coming into prominence
CHINEDU:
Aki Na Ukwa brought me into the limelight and this was done alongside Osita Iheme in 2002. The movie was produced and directed by Anayo Uzor Philips and was marketed by Kas–vid Industries. My meeting with Osita Iheme was God ordained, and I can say that fate brought us together.
OSITA:
Aki Na Ukwa gave us fame because after that movie, I became popular in Nollywood.

Nollywood
CHINEDU: Nollywood is like a child of circumstance borne out of opportunity. At the time Nollywood came into existence, only a few people were ready to stick out their necks for the industry to grow. Nollywood is doing well today because it provides jobs for people. There has been little encouragement from corporate bodies and the Government. But I think Nollywood has been able to show its potential as an income earner and will continue to create jobs for people.
OSITA: Nollywood is a growing venture because it is no longer where it used to be five years ago. I believe Nollywood is not stagnant because the practitioners have shown a lot of improvement in terms of storyline, picture quality and so on.

Between Government and Nollywood
OSITA: Government should address piracy. I urge Government to put in place strict laws against pirates, laws which when enforced will serve as deterrent to others. From now on, pirates should be brought to book. Government should assist in the provision of equipment and facilities to produce good movies.

Coping with fame and fortune
CHINEDU: Being famous is one thing and the fortune or affluence that beclouds it is something else. It is not easy to continue with the kind of life I lived before. I can only imagine the things I used to do or act them out in movies. I am still myself but the personality of a star limits my going out and the company I keep. Fame and fortune have not changed me because I am still a lovely, easygoing person.

OSITA: Fame and fortune are not easy to manage. Fame is one thing one acquires and it requires discipline to manage the fortune. I no longer do things I used to do before now. I now manage my fortune well. I make new friends and keep my old friends as well. I do this because God has placed me in this position. I do not have to be arrogant now. Stardom has not changed me, it has taught me to avoid friends that can influence me negatively. I am always conscious of what I do. It is challenging for me though I am thankful to God for bringing me this far.

Coping with female fans
CHINEDU: They are my fans. They can admire me and encourage me to keep up my good work. My female fans only encourage me and congratulate me on every job well done. I don't know about other things.
OSITA: I love them because they are always there for me. I cannot chase them away since they are my fans. Anytime they come around, I give them the attention they require although I tactfully avoid the most annoying ones. This is because if I do not control myself as regards my relationship with the opposite sex, I may lose control.

Plans for marriage
CHINEDU: I am not married. I have never been married. I am not denying anything but the pictures people saw in the newspapers were from my birthday bash which I hold every year. I have not married any girl before. People can say anything, they will not stop carrying rumours. If people have not said anything about you before, it means you are not relevant or important.
OSITA: I am not married, I will reveal it when the right time comes. It won't happen this year. I don't even think about it since everything is left to God. When the right time comes, I will disclose.

Background
OSITA: I am the last child in my family. I am an easy-going, hard working, and a God fearing person. Growing up was easy for me because I grew up in a Christian family and my day-to-day activities involved going to church and attending block rosaries. My environment challenged me to fight for greatness. I discovered myself and worked out my destiny. I prepared for my future and my family supported me.

CHINEDU: I am a lovely guy. I hail from Ihuoma Uzoakoli in Abia state. I was born into the family of Mr and Mrs Michael Ikedieze. I have three brothers and four sisters. I grew up in Abia and Imo states. I had a very nice upbringing and attended IMT Enugu where I obtained a Higher National Diploma (HND) Upper Credit in Mass Communication.

Any regrets
OSITA: My only regret is that my father died when I was a kid and he is not here today to see what his little boy has become. I would have loved him to be here and encourage me to do more. I really wish he is still alive.

Playing childish roles
CHINEDU: I feel normal doing it because it is a way of educating parents about the pranks, which their children play. A child would always have the urge to play pranks, It is neither odd nor out of place for me to play the role of a mischievous kid because it is a normal day-to-day occurrence.
OSITA: Movies educate and teach lessons. When one watches a movie about the mischief that is prevalent in growing kids, one would readily know what to do when the situation arises in one's home. What I portray in movies as a mischievous kid teaches parents to learn how to correct their kids early in life. I also act serious roles like I did in A world of our own.

Nollywood and AMAA
CHINEDU: AMAA has become very competitive. Nollywood stars used to think it was their own thing. The event at the last awards reminded us that AMAA is truly African movie Academy Awards (AMAA) and not Nigerian Movie Academy Awards (NMAA). If we don't take time, we will also take the back seat next year. This is because money and resources put into movies here are nothing to write home about. Producers should pay the actors and actresses well so that they can put in their best. Although Nollywood produce good movies with limited resources, we should try harder to produce movies that can win awards.

Current work
CHINEDU: It is a family story about a careless man who in his youth has children from different women. My mother in the movie is a house help who is impregnated and abandoned by her boss (my father). I return to my father's house after my mother's death alongside my brother (Osita Iheme) in order to take our rightful place and to avenge the injustice meted out to our late mother. It has great casting. The movie is produced by Kingsley Okereke, Emeka Igwemba and Ikechukwu Onyeka and directed by Ikechukwu Onyeka. I am optimistic this movie will go places.