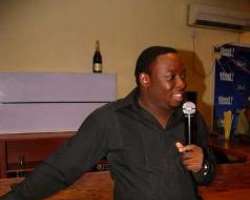 Jedi, one of Nigeria's in-demand comedy talents, is set to rock with another A-list event – the Jedi Live - which will hold at the Magnolia Hall, City Mall, on Sunday the 10th of May 2009. The event, which will be a strictly by invitation, has a number of seats are reserved for fans who are to pay N5, 000 gate fee.

With comedy locked down, Jedi is officially branching into music with the launch of his brand new album, The G.Pikin project, an 11 tracker that features a wide array from love songs to religious, including Song for Nigeria (Proudly Nigerian), Jehovah and Dance. Videos from the album are already ruling the airwaves across the country.

The album also features collaborations with some of Nigeria's hottest talents including M.I, Nomoreloss and Jafextra.
According to Jedi, “This album is a testimony of God's grace in my life.” Anchored by Tee-A and Teju Babyface, the exclusive evening will feature the album premiere with guests performances from Sound Sultan, Eldee, 9ice, Dekunle Fuji, Kenny St. Brown, Mike Aremu, Bouqui and Tosin Martins, with comedy performances by King of Comedy Ali Baba, Basorge Tariah, Emeka Smith and A.Y.

Fondly called the “well-fed comedian of Nigeria ”, Jedi has risen through the ranks of the close-knit comedy scene in Nigeria to become not only highly sought after, but a well respected entertainment brand for discerning individuals and corporate organizations. With a “tight 3-hour show that people will not forget in a hurry”guaranteed, the exclusive evening of album premiere and comedic performances will center on Jedi's musical performances from his album – and guests will be seeing him perform his comedy and music in a whole new light.

“So far, I should be having 3 appearances that night that feature a live band performance, stand-up comedy and DJ mix performance. We are still tinkering with it to pump up the surprise factor, but you know you're in for a fantastic evening.” Jedi enthuses. “God has been good to me and I've got to testify!.