What Happened Between Ayo Mogaji And Me Was Divine - Jibola Daboh 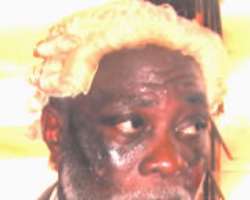 A chronological study of the man, Jibola Daboh, an artiste par excellence and a Jazz music lover, will instantly expose the Africanism in him –a highly controversial person when it comes to religion. He hit limelight in the Nigerian movie industry with his marriage to actress, Ayo Mogaji, a few years back in an Ifa traditional way. Today, the marriage is no more, as Ayo has moved into another marriage while Daboh is still searching for a soul mate. In this interview with Tope Olukole, the white bearded actor is never tired of calling a spade a spade, he speaks about his best kept secret and revealed why his marriage with Mogaji eventually crashed. Excerpts:

You seem to prefer sitcom (Situation Comedy) to acting in the English movies, why?

That's a question several people have been asking me even the last time I was in the United Kingdom on Ben TV and Passion TV. As far as I'm concerned, I am an actor, either I act in Yoruba or Hausa language. There is nothing like English actor or Yoruba actor. We are all actors. I know a time will come when mediocrity will no longer be celebrated in the movie industry. It is no longer news that the government has shown interest in the industry, corporate organisations too now believe in us for their adverts. So, you'd better use the best actors, if not, good advertisers will not put their money there and if they do the first time they cannot be deceived the second time. Of course, I'm a lucky one that has been blessed with the skill and talent to go whichever way I want to go in acting. A lot of people don't know that, even some of my colleagues, sometimes I put my acting on one side and I pick up my drum and play jazz. I can't claim to be a jazz musician but I have flair for jazz. I've played a lot of jazz bands both here and abroad. So when the time comes for me to display my God-given talent I just go wild and I am happy doing it.

How did your foray into the entertainment world began?

I can't say I started acting twenty or forty years ago but I know I grew up knowing I'm an actor. I have started being on stage doing biblical plays since I was a child then in primary and secondary school, when I started a drama group but it was a comedy group, but I called it drama group. But I know categorically speaking that I've been going this path since 1961 when I played the Good Samaritan. I have several names by which they call me then, if somebody says Samson, I know this is from my primary school or secondary school because the major play I did then was Samson and Delilah. I have always been into Arts to the dissatisfaction of some of my uncles. I must say that their disagreement also encouraged me to say I want to be the best. There is this uncle of mine that hated me doing the Arts though he's late now but thank God before he died in the 80s when I did Rage in Harlem , it was Bros Ben Tomoloju that wrote about it. I could remember the caption, it was the US- Based Nigerian Actor Faces Rage in Harlem . When I came back my uncle was saying 'you're actually taking this to places, aren't you?' And I said 'yes because he never expected that.' When I was in Nigeria doing stuffs like At Your Service and Awada Kerikeri he just thought I was being stupid and wasting away. But to God be the Glory, before he died he came to respect what I do. That's how I started. I think the only time I deviated from Arts was when I was in sports, when I played football. I did that briefly, played for several clubs and I went back to choreography. My first love in theatre is dance, and I was privileged to be director of Black Heritage then. When I was in America I always came back home to do some bits on TV, that was when I was even working except for the 90s that I didn't even show up in Nigeria at all.

While away in America, were you there to study or you went in search of greener pasture?

I went to study but I knew I had to stay back there. That has always been my dream because we all know that America is the place of arts, a place where you can express yourself. So, I have gone on tour of the US and come back home and realised that I had to stay on there.

When you were in the US were you practising traditional religion?

Yes, and I'm still practising it.

Sometime ago you were referred to as a Babalawo by the media, how did you come about this?

Do you remember my response then? I said I wish I had enough knowledge and brain to be one. I wish I could devote time to study and know what a Babalawo knows. Most of these so-called idiots who are Ph.D pastors cannot assimilate, I'm not talking about fraudulent Babalawo, we don't even have too many of them anymore. Babalawo is supposed to be respected, they mount the pulpit and criticise them but when you go to where many of these so-called 'unbelievers' worship, they will never condemn any religion.

So, why condemning them? I have a pull to study them because I know I'm supposed to be a priest, but the point is that I have been too reluctant to study to be one, so what I can do is to appreciate it, learn the little I can understand that there is nothing wrong in you being a Christian, nothing wrong in you being a Muslim and nothing wrong as well being a traditional African believer because there is no tag on it. The western world has put a tag on it –animists they call it, polytheists because they believe we have more than one God; they said this because they lack knowledge. If an African can believe that your God, the father, son and the Holy Ghost is three integral part of one, then how come you cannot believe or understand that the Orisas are several integral parts of one. God is too big to be one, and He's big enough to be millions. He is an entity that you don't even know what size, what gender He is. What tells you God is a man because the Bible or the Qur'an tells you? You look around you and you see that God must encompass both genders.

Which of the traditional religions you belong to?

It depends on what deity they worship in your family? My grand father was already a Jacob before I was born and as I said, it is never a separate thing. I know your next question will be why are you always wearing white? I know the spirit that is assigned to guide me. I understand Obatala, an embodiment of purity, that's why you see me in white. I didn't meet any shrine in our house when I was born. My father's name was Abraham; nobody forced me into what I believe. I was born a Methodist which also makes me not to understand these churches now. I know we go to church with the big benches, we pray, drop a small offering and somebody is there to help you. But today it's about best cars and the suits you wear; you know I just cannot compromise. And we hardly ever deal with religion. Religion is just a showroom for spirituality but I like to go beyond religion.

Do you own a shrine?

No, I'm not even pure enough to be a priest or own a shrine. This is no church or mosque that anybody can own. Maybe God will guide and accept me to give me more knowledge to own a shrine, even in the movies we produce, a lot of wrong messages about the traditional African belief are shown. I have had a cause to walk out of a production because of this misrepresentation.

Well, that should be long gone now. Ayo Mogaji is married to her husband, so what else do you want to talk about? But lately something happened that really hurt my feelings. I had a friend that I told 'let's see what can happen with 'this one' after Ayo's marriage and I walked in with my friend to a place, the place in question is O'jez. Next morning she started getting text messages about how bad I am, how I got what I wanted from Ayo Mogaji and left her.

Who sent the text messages?

The person did not show his or her face. Initially, she was claiming to be helping the lady and when that one called back she switched off. And then the next text came in, abusing her that she won't listen. That one was saying how did she even get her number? So I think what everybody needs to know about myself and Ayo Mogaji is that whatever happened between us was divine. God said she's going to have a child through me and it was manifested. There was no love between us at all.