Arsenal Fan Hangs Himself after Losing 4-1 To Manchester 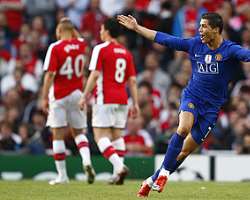 NAIROBI - AN ARSENAL fan in football-mad Kenya hanged himself following his team's 4-1 aggregate drubbing by arch-rivals Manchester United in the Champions League semi-final, police said on Wednesday.
Suleiman Alphonso Omondi, a 29-year-old Kenyan living in the capital Nairobi's Embakasi neighbourhood, hanged himself in his Arsenal shirt late on Tuesday after the match, police said.

'We were watching the match at Bamba 70 pub, and when Arsenal was defeated, Suleiman just walked out in protest and he was crying,' Calvin Otieno, one of his friends, told AFP.

'We didn't know he was going to hang himself until this morning when we received the reports and came here to find his body at the balcony,' Mr Otieno said outside the deceased's home.

Arsenal slumped to a 3-1 defeat at home in the second leg of the Champions League semi-final, capping a disappointing season for the Gunners who were already out of the Premier League title race early in the season.