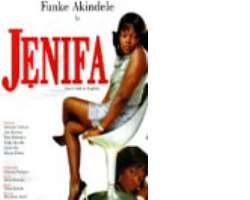 If the information reaching us is any thing to go by, then Jenifa 3 will soon hit movie shelves

According to our source, African Actress of the year, Funke Akindele, who equally clinched the Best Actress of the year Award at the last city people awards for excellence in Lagos, disclosed this to the press in an interview recently.

She said unlike the first two, there will be a balance in the use of both the English and Yoruba languages, thus minimizing the subtitling of the film in English. The double award winner said, “I intend to premiere this 3rd part in Nigeria, America, London and everywhere Jenifa made a huge impact”.

“It is a big project and I hope to actualize it by the grace of God. Also I intend to be fully involved in its marketing,” she revealed.

http://nollywoodgists.com also gathered that for winning 3 outstanding awards, for her film, Jenifa, Funke was presented with 8 designer shoes and bags from the Taibal group. She expressed gratitude to the management of Taibal for the remarkable gesture of love-shown to her.

Funke revealed that Nigerians have not heard the last of her block buster film Jenifa, according to her, she is aleady working on Jenifa 3 which will be titled, 'The Return.' “In this movie, Jenifa will finally become the big girl she's been striving for,” she said.