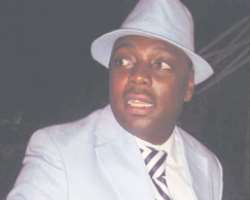 Segun Arinze, the debonair artist, is not in the acting world by chance, but by choice. He demonstrated traits of acting right from his early childhood, and the instinct later stuck and today he is the toast of movie buffs.

The star actor who spoke with http://nollywoodgists.com desk said his acting career was driven by passion and as a student back then in Ilorin, he featured in drama and Ripples on NTA programme and this caught the attention of his dad who tried to probe his interest in acting, but later gave up.

Although a soccer exponent, he never taught of making a career out of football, and so when in the early 80's a friend, Ayo introduced him fully to career acting, it did not take him time to shine brilliantly and rise to stardom.

As he puts it, the talented artist who daggles his fans with scintillating roles says, may be “I'am suffering from over talent, because I play multiple artistic roles, I sing, I write, I produce, I direct, I am a trained actor.”

Arinze also had an early romance with music, but as he puts it his first album “was a successful disaster in the commercial world.”

On the controversy trailing his conspicuous role in the popular Black Arrow character, as a notorious bandit, Arinze clarified that there is a great discrepancy between the real and the acting world. “The fact that I play bad boy roles does not mean I am a bad boy. It is a world of fantasy and I don't expect people to access the true content of my character through my roles in movies.

He used the renown actor, Chika Okpala of the Zebrudaya fame as an illustration, stating that people had been so stereotyped with the Zebrudaya role that they cannot separate his acting world from his real world.

On the popular assumption that behind the tinsels of Nollywood lies some ugly realities such as sex scandals, he said it would be wrong to single out actors as those involved in scandals as virtually every profession including politics experiences such scandals.

But speaking for his primary constituency, he said young girls should not dress provocatively to avoid sexual harassment.

He also advised that talent not sex should be the basis of negotiation with producers, and any producer who insists on sex as a bargaining tool should be damned.

Commenting on the last African Movie Academy (AMAA) in Yenagoa in which Nigeria actors had a dismal show up; the popular Nollywood star, said Nigeria did not work hard to deserve any of the prestigious awards.

“I was happy and proud that Nigeria did not go home with anything, as far as I am concerned, Nollywood is dead.

We have been basking in the euphoria of been called the third largest in the world. This year's AMAA award is a wakeup call for us. It is crazy to see films like Chicken Republic produced in Nigeria. We have gone beyond the level we are, people are watching us outside.

We shouldn't be contended with selling 30,000 copies of movies, our movie had gone beyond only us watching it.”

The movie artist alerted that Nigerians should not allow Nollywood to drift to a level where South Africa and other African countries will come and teach us movies.

The actor also empathize with his Rivers born colleague, Ibinabo Fiberesima, who is presently involved in a legal tussle. He said the matter was very sensitive giving the circumstance and the actors Guild of Nigeria (AGN) will try as much as possible to intervene and see to the end of the matter so that it could be put to rest.

“As an actor you don't have to do movie alone, but you have to be part of what is happening around you. The commissioner rode me around town personally in his car and I saw things for myself. The Rivers state health care policy is wonderful and in no distance time Rivers State will be a medical Mecca of a sort.”

Arinze is seen as a role model by many persons, and if he is called upon to go to the creeks and address the militants, he said four factors will be put into consideration. “I will look at the psychological, social, physical and passionate effect of their actions and try to appeal to them.

During the interview session, the famous actor spoke in voluble spate and in his characteristic style popped out his bulging eyes which he counts on along side his other bodily configures as inestimable assets. While answering the questions. Arinze is happily married with children.