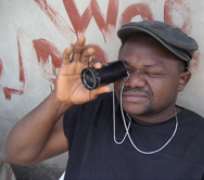 With the current economic meltdown, this definitely isn't the best of time to lose cash, especially when it is hard-earned.
As you read this story, Lancelot Imasuen is peeved! He is mad at himself for losing his ATM card. He is also mad at his bank for failing to stop ATM crooks from withdrawing N80,000 from his account before the run was halted!

According to feelers reaching http://nollywoodgists.com, his plight began late last week when he went for an industry meeting on the Island.
Close pals say that it took close to two hours to find a place to park his car on the ever busy streets of Lagos Island. Between where he parked and the venue of the meeting, his wallet, containing his ATM card, a couple of $100 bills and about N6,000 slipped out of his pocket unknown to him.

“I was at Silverbird Galleria when it dawned on me that I was in trouble,” he lamented to close pals. “I got an alert from my bank that N80,000 had been withdrawn from my account! I was like, how? When? I had not made any visit to the bank. So how could that have happened? I was going to laugh it off as a joke when I suddenly realised my wallet was not in my pocket. It was missing. I had just been robbed!” Alarmed that the thieves might hit him for more cash, he quickly called his account officer at his bank. He confirmed the withdrawal and took steps to avert more hits. “I am not happy with my bank. Fine, I lost my ATM card. How did those robbers generate my pin? I am totally at a loss,” insiders say he lamented.

Anyway, there is still hope the perpetrators will be brought to book. At least, his bank has reassured him that ATM machines automatically snap transactions at cash points. But he is not buying into this because data base in Nigeria is still light years from being comprehensive.
“If we were in the UK or USA, I would believe them. But here in Nigeria, that's a pipedream.” Imasuen returned from Boston, USA, last week, where his language based movie, Ebuwa, premiered.