Sex for Sale is normal in Nollywood — Femi Branch 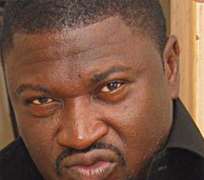 Before playing the nasty role of Oscar in the now rested soap Domino, Femi Branch was not a popular actor. But soon he became the toast of many producers in dire need of guys who would play the “bad boys' role” in movies. He spoke to HVP on his experience in the movie industry and quality of films produced. Enjoy it.

It's funny when I hear that. Actually, this nasty roles constitute about 40-45% of the jobs I do. I think there is a kind of appeal that goes with notoriety, people just like the bad roles and that is only what they remember. But I know I equally play roles that are not bad.

Every role is positive. If I'm playing a bad role in films now, I'm passing a message across to every bad guy in the society, that there are people like this and it shouldn't be that way. Even though you may have excuses for the kind of person you turned out to be, you hold the rein to your destiny. Certainly, roles like these are positive because we have a lot to learn from it and (except where there is no message to be learned from the movie), it make one a better person.

Well, the industry is yet to come of age. Though we've really tried, there is so much work to be done. We are obviously lost because of our being rated the third largest movie producing nation in the world, and we think it's time to celebrate.
Yes, it's an achievement of some sort, but we need to consolidate on our achievement.

The Nigerian movie industry is so much in a hurry that so many films are produced in a week and the following week such films are not to be found on the shelves because they have to give way for new ones.

Let us think more of quality, let us do what they do in America and Europe where two, three studios come together to do one project. That is the only way we can move forward in terms of quality.

Sometime money may not be the issue but the problem of paying adequate attention to details. You see, I was watching a Nigerian movie the other day and I saw a helicopter shot down with a pump action riffle. I laughed because it looked so stupid. What we don't understand is that the viewing public have access to other movies produced in other parts of the world and they are not illiterates.

They watch American movies, Indian movies and they see how things are done. Most of them know that it ought not to be like that. You see, I'm neither a policeman or a soldier, but because of the information I have, I know that a pump action is a short range riffle. Even if you are shooting at someone on land, there is a range to which it can go, that is why you have various ranges in millimeters.

If you are given a 35mm range of gun to shoot a 65mm target, I'm not sure it will reach that target. So, how can my brother use a pump action to down a helicopter. It's so stupid.

And it was obvious they spent so much money on that movie because there were two helicopter involved in the movie. We need to pay more attention to details and training on scripting, that is the only way we can move forward.

Well, scriptwriters have their own share of the blame. The man who writes the story may be different from the person who adapts it for the screen. The script writer does it the way it comes to him. And after that, it's the responsibility of the screenplay writer to adapt the story for the camera. I mean this is a profession and people study to become screen play writers.

It's one person that writes a screen play not a group of people. A hundred people can write a story but only one can write a screen play and that person must have a wide knowledge of things, at least a little about everything. We don't even understand what these things are all about.

When the director gets the script, he's supposed vet it in consultation with other professionals. It is a serious job that do not require apprenticeship.

A continuity man is another man who holds the fabrics of production. If you miss him your production is in trouble. When you see a man wearing a white shirt and a blue tie and the next moment he is putting on a green tie on a white shirt, it simply means the continuity man did not do his job well.

We think the audience will not see these things, sometimes the viewer may be more technically minded than we think. We need to pay attention to details. Let them go through training for God's sake. If we continue like this, we will continue to turn out films we cannot present at international films festival, yet we pride ourselves as world's third largest film producing country.

Fortunately, I'm not one of those motivated by money. If I am, I'd have several houses in VGC. Really, it has to go beyond the money. We all need money, but if the industry must move forward, we have to do things the right way. I respect people like Joke Silva. It took such a long time for her to get roles in Nollywood.

People like her would read scripts from beginning to the end, even edit part of the script and if you're not okay with that, she walks away.

I know most of these marketers are egocentric, they wouldn't take that. People like that will not want to be involved in substandard production. Such people are contented with one solid movie in a year.

If a majority of our people adapt Aunty Joke's style, these people will be forced to change for the better. And the people in the best position to effect these changes are the different associations existing in the industry today.

They must make it mandatory for members to get proper training. They must engage in constant training for members and there must be no room for idleness.

In the beginning we set a rule that nobody should collect money from marketers so that we can press home our demands. Everybody agreed, but unfortunately some people went behind and sabotaged the rule. And the marketer exploited that situation and resorted to offering less than what we vowed not to collect. They knew we were not united.
Project at hand

Since it's not possible for an actor to live on movie income alone that's why I have to be positive and think of something else to do to argument my take-home, keep my family together and make them happy. Even in America and other developed countries, actors still have other sources of income because they must retire some day.

Right now, I'm fully involved in my book which I'll be launching in London next month. The book is a collection of three of my plays, and fifty of my poems.

I have been working on the magazine project for about two years now. But it's not the first time I'd be involved in publishing. I once partnered with someone but it crashed. Although I didn't study journalism, it's something I have a passion for, but I hope to take an extra degree in journalism later.

Let me start by saying it's a universal thing and it's not synonymous with the entertainment industry. It's there in the banking industry, medicine and the law professions. Our industry is the way it is because we are in the glare of the public. It is a fact, sexual harassment exists in the movie industry.

It's not like every woman in the industry must sleep her wat to the top, I know people who have stuck to their guns to rebuff any advances from producers for movie roles. Yet they made it to the top. It takes great sacrifice especially when there are more beautiful girls ready to drop their skirts for the same role every time the producer is on location. That's the sacrifice I am talking about.

So it's difficult for young girls coming to the industry because of these challenges. Producers sleeping with starlets under the guise of making them stars is not unheard of. It is unfortunate. Whatever that takes you to the top, will keep you there. So, it's better to work hard and pray.

The one peculiar to the Yoruba movie industry is that they have groups, every major actor or producer belongs to a group. And anyone desirous of going into the industry must join one or two of these groups.

And when you are talking about sexual abuse, it happens in these groups. Young girls are regularly abused.

One complained to me just some few days back how she was invited by her Oga for a production and was asked to sleep in the same room with the Oga and four girls. You see when these girls are called to locations, they are not given rooms.

The one chosen for the Oga is considered fortunate. The Oga usually has about four girls in his wing and anyone who dares rebuff his advances, leaves the set.

Now the girl in question told me how she refused the advances and was thrown out in the middle of the night. She opted to sleep in the bar, but the oga would not let her be. He chased her out of the bar on the ground that he was the one that brought her to the hotel.

For such aggrieved lady, the association offers no reprieve. And it continues like that.

It's something that has come to be accepted in the ANTP. They abuse these young girls regularly and it's crazy. These group thing must be stopped. There was an attempt to ban the different groups but it failed because the person making the law was even guilty of it.