‘I brought glamour into 'Papa Ajasco'’ 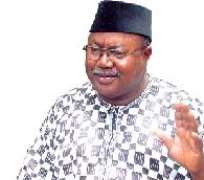 Femi Ogunrounbi is a musician extra-ordinaire who is more popularly known for his role in the Papa Ajasco family comedy. He played the role... of Papa Ajasco as a replacement. Today, the former Papa Ajasco is back. Femi has taken on other challenges, and he has gone back to his first love, music. He spoke with Hazeez Balogun.

You have stopped playing Papa Ajasco, now you play chief in another soap. Has it been easy switching roles?

I try to define the chief, although they look a bit similar. It is just that they both like women. But I think Papa Ajasco has love for women without being discriminating. Papa Ajasco goes for any kind of woman. But in the case of Chief, he too likes women but he seems to have a thirst for younger girls rather than the big girls. But I think eventually this is just a reflection of the problems we have in our society. Both roles are challenging, but one has to be careful not no mix them up. If you watch me as chief, you will see that I am very careful in differentiating chief while not making it similar to Papa Ajasco.

The old Papa Ajasco is back. Many people don't know actually that there is a change but there has been a change. You know, taking on the role that has been played by another person for eight years can be very challenging.

I saw my part in Papa Ajasco as one of those assignments, one of those challenges as an artist. I mean, if nobody gives me pass mark, I pass myself. I am okay, I tried to interpret it the best way I wanted to and I think I tried.

In fact, what I enjoyed most was that I brought in a new set of viewers to watch the programme. That was what the advertisers focused on. I was happy that I brought new viewers from the high class cadre. They said that from market analysis that most of Ikoyi, VI, and Lekki residents who didn't watch, who never liked the former outlook of the programme started watching when I was Papa Ajasco. I think I have succeeded. I take it as an adventure and I have finished that one. I am not disappointed.

What can you say about Mama Ajasco who passed on recently

Unfortunately I never met her. I am very sad to see that our artists, Nigerian actors and actresses just pass away without any assistance. We have a technical problem, and I expect that if we have a problem as big as that we should seek solutions. If it was in the developed countries, if she worked in an organization and she was appreciated, she would have been living a comfortable life where things like health care and welfare are sorted out easily. Nigerians, organizations, viewers, viewers who appreciate what artists are doing should not allow actors and actresses to go about without any financial help. If finance is gone that's the end of it. It is difficult to replace a person, no matter how many we are.

You seem to like the roles of a womaniser

I play whatever thing they ask me to play, unless they say 'bros, we want you to do this one the way you did the last one.' I am an actor I do whatever I am asked to do and hope I do it well.

Not that I hate women, but they don't constitute any serious problem or distraction to me than they are supposed to. I like women, nobody doesn't like women, but not in explicit ways, but I think I can balance myself.

How did your journey into acting begin?

That's a long story. I started as a nurse, I was born in Ile ife. I grew up there and I had my primary school there. Since I was small I had been into music. I went to Adventist Grammar School. I went to study Nursing. After school, I practised Nursing for a while. Even when I was in Medical school, I was always drawn back to the arts. I used to hang out with the guys at the arts department. I did dramas with them.

When I eventually left Nursing, I went back to studying music and drama. I was practising at the General Hospital in Ikeja then. I left in 1984. Then, each time I was in the clinic, my friends in the arts would call me, 'come and direct this, come shoot that' and all that. So I spent all my spare time in my medical years of practice, in the theatre.

Where did you get the interest for acting?

Well, those days, my mother participated a lot in church drama and she did it so well. She acted as if it was so real. I think that was where I must have picked the interest from. But then even among my peers as a young child, I was more into making people laugh and happy. So I think it is an in-born thing.

You are also into music, did you study that too?

Yes. I am actually more into music. I studied music. I play instruments. I play a lot of instruments. I write music, I score music, I play and perform music and I also teach people how to read music. In fact, I am music epitomised. My first love is music. That was why when I left Papa Ajasco, I was the cordinator of Studies for Wale Adenuga's Film School. I decided to go back into music. I resigned from Wale Adenuga's school because I wanted to refocus on music. I realised that I was going far away from music. I was the one who wrote music for Wale Adenuga's soaps. I am doing the same thing now for other television programmes.

How would you rate music in Nigeria today?

I have said it time and time again, and I am going to repeat it. Nigerian musicians must learn to read and write music. I tell my students that talent is not enough. Talent plus training is equal to skills. I have tried to get to the executive of PMAN, I have tried to have a chat with people in the music industry, I have tried to tell them to encourage studying music. The truth is that all these Puff Daddy, Beyonce and other Americans that Nigerians are copying, they all have studied music. It is a culture in the Western world that if you have a talent in something, you should get trained in that field. It would only make you better. That is the problem I have with most Nigerian musicians. I don't know why we have decided to relegate ourselves like that. There is no music that I hear that I cannot write and reproduce. When you are gifted in music and you also study music, you can never go down. This is a limitation for many many Nigerians.

What is painful to me is that, the Western world has now focused on Africa for new things and we are not forth coming. Over there, they are used to scores. Here, we don't score music. Do you know that when 9ice performed in the UK for Mandela, he did not rehearse with anybody over there? All they asked for was that the score of his song was sent to them. Even without listening to his song, they could reproduce it. All these things are important. A friend, Yinka Davies, was to perform in Italy some time ago. She ran to me and said, 'uncle, please score this work for me, don't come with a band'. She took that score to Italy and performed the song with a band over there in Italy.

When will African musician get to that level? When our songs can be treated professionaly. I want Nigerian musicians to take their careers like a profession, they need to learn the rudiments. Doctors go to medical schools, lawyers go to Law school, musicians should also endevour to go to music schools. Today, they are all lazy. Once you can sing and dance that's all, they think they are made.

There was a seminar some time ago, imagine it was free lessons for musicians, and only two musicians were there.

I am happy that in Nigeria, we have various kinds of music. I will be meeting with uncle Tee-Mac soon, maybe we could talk on these issues.

What are your regrets in life?

I don't really regret my actions. The only thing that I regret is that I left the Nigerian Troupe. Then, I was frustrated out of the place.

The Nigerian music industry is fast growing, the same cannot be said about the movie industry

Well, all I can say is that we are improving. Yes, in the days of Ogunde, he shot in celluloid because he had the opportunities to work with foreigners. Celluloid is expensive. Nobody can afford that in Nigeria today. So we started small, using the equipment we can afford. Slowly we are improving, the standard is being raised steadily.