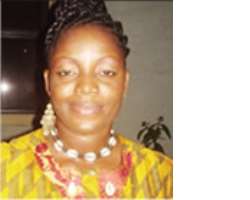 I shake my hips very well - Ayanbinrin
Olakuye Tosin, otherwise known as Ayanbiri is a female talking drummer. Just as The American hip-hop star, Shakira sang 'Hips don't lie', Ayanbinrin believes that hips can serve as a means of communication. In this interview, she says that playing the talking drum is her unique identity while the genre of her music is called, 'Tradhiptional.'

How would you rate musical career in Nigeria?
It is convenient. Definitely for anything you are doing, you must look out for the monetary aspect. But money is not everything. I believe that it will come at the right time. There are times I give free show to sell myself out. Right now, I am comfortable.

When did you start your career professionally?
I don't know if I am dancing professionally. But I know I am a dancer. I have to shake the hips very well. Some may think that shaking one's hips is a way of enticing men but I am only doing my job.

How did you get into talking drum music?
I actually learnt it in 2003 when I searched for a unique identity. I needed a selling identity not only through songs. Professionally, I began my musical career in 1999. I always wanted to be a musician even though I studied Chemical/ Polymer Engineering at the University. I am from Ondo Town in Ondo State. I am the first child in a family of four.

Why do you use talking drum?
I love dancing to anything traditional. I love indigenous things. That was what led me to it.

Who is your manager?
I am not signed under any record label company presently.

Are you married?
I am married with children. I met my husband in Lagos State University. He graduated when I was in my first year. He studied Mechanical Engineering. Is he in support of your career? Yes he is. If not, I wouldn't be drumming.

What is your style?
I am simple, elegant and look good in anything I wear. I wear anything African. My hairstyle is part of my trademark but I don't wear it at all times because it is difficult to sit down and make it.

What message does your costume convey?
It is pure African. I love to wear trouser because I dance with ease in it. As a drummer, I have to be flexible, dynamic and free. I also wear jeans and top. But whenever you see me, you must see a touch of Africa that is, cowries fitted in my hair, bangle, earring and cloth.

If not music, what other career would you have been into?
I would have been working as an engineer.

Would you go back to that?
Maybe later but I don't know yet.

Do you have a favourite colour?
I love red because it signifies danger which means that I am dangerous.

Do you have any message to your fans?
Be diligent and know what you want. Don't let people discourage you.