Love is good but not enough – Oreva4ever, an artiste 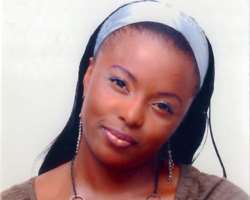 In Isoko language, her names, Efemena Orevaoghene Benedicta, are well loaded with meanings which would want you to probe into the circumstances surrounding her birth. But the soft spoken pretty artiste smiles and opens up her arms, saying she was not told that any special event occurred before or during her birth.

”All what I know is that my parents call me Orevaoghene, which means God's will; Efemena means 'this is my wealth. It is a normal thing in our place to give names depicting different meanings. As Christians, my parents thought of giving me names to glorify and appreciate God. So there was no special circumstance or something unusual when I was born other than giving names with meanings. But for short, I have adopted Oreva4ever which is a bit funky,” she says.

Oreva4ever does not feel comfortable with the label of a gospel artiste, even though she sings gospel; she prefers to be seen as an artiste who sings about God, love and purpose.

”You know when you say you are a gospel artiste, that presupposes that all what you sing is gospel and when you decide to sing some cotemporary songs about love for instance, people may begin to see you as unserious or deviating. Yes, I am a Christian but singing about other things in addition to gospel does not necessarily make me less Christian,” she clarifies.

Oreva4ever, a Botany graduate of Delta State University, Ekpoma, tried to strike gold with Project Fame during the Warri Zone competition, she could not go beyond the preliminary stage, yet, she is not discouraged. She has, however, been signed up by a record label, ANI Records, which is working round the clock to release her entire album to the music shelve very soon.

After her degree in Botany, Oreva4ever did her youth service at Ekiti State Television, Ado Ekiti where she had the opportunity to pursue a career in broadcasting but the urge to sing would not allow her to remain on the job which she clinched after the mandatory one year.

”I will tell you that working at the television house was fun but you see, I just discovered that I am not cut out for television. Because of language barrier, I had difficulty especially pronouncing names and places in Ekiti and this did not enhance a smooth blend for somebody like myself learning to pick up one or two things. After sometimes, I had to quit and right now, I have determined to pursue my love which is music, though I have a job to keep mind and soul together,” she says.

Oreva4ever would not agree that growing up in a place like Warri automatically makes a youngster a rascal or wayward. She says she is proud to grow up in the place and yet, she is still proud to see herself as a decent young woman.

”Anybody will tell you that Ovwian Secondary School in Warri is known for its notoriety. But I attended the school and I did not lose my head. What happened was that I lost my dad very early and because of this, people around told my mother that I, in particular, would turn out to be a wayward girl, moreso that my dad was not around. Because of what they told my mother, she became very concerned but I assured her that the death of my dad was a challenge to me as an individual and that I had vowed to make him proud in his grave.

”It was hard going to school but because of my vow, I endured and even when I proceeded to DELSU, I still did not forget what I had told my mother. You just have to know my mother; she made sure that the death of her husband did not rob her children of care and support and you can't afford to let her down.

”It is true that the society we live in influences some of what we do, but when one is focussed and determined, the sky is the limit. I have learnt to be independent, not to depend on anybody, even a man because I believe love is not enough,” she tells Appetiser.

Oreva4ever who admits that she has been a victim of love before, says she has become wiser in terms of relationships. She says the heartbreak she had has taught her to think twice before trusting a man again.

”Love is very essential in a relationship but for me as a woman, love is not enough. I believe that when a woman has something doing on her own, even though if at the end of the day, the relationship runs into a hitch, she would not become helpless. It is not wise for a woman to depend wholly on a man professing love. Love is good but it is not enough, I still insist,” she argues.

You will never catch Oreva4ever in skimpy dresses simply because she is an artiste. As far as she is concerned, a woman is not only recognised as an artiste when she puts on dresses that leave nothing to imagination.

”Are you saying that the way I dress now diminishes my ability to perform as an artiste? It is crazy to think that crazy dressing and nudity sell music. My background would not allow me to do that. We still have our decent ways of doing things even though we have come under western influence which has really eroded our essence as Nigerians. We should try to strike a balance, we are Nigerians for God's sake,” she says.

Oreva4ever who refuses to divulge information concerning her current relationship, rules out the possibility of getting married to a pastor when she eventually wants to settle down. She says it is not when one gets married to a pastor that she can be seen as a very serious woman morally. As far as she is concerned, her songs are a veritable vessel for dissemination of God's messages to mankind.

”In my songs, I preach love, purpose, morals and unity and whenever I do that I am fulfilled that I am doing something for mankind,” she concludes.