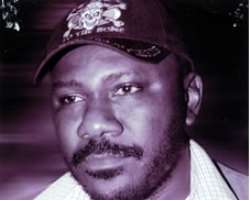 Until he acted Blood Money in 1996, only few people paid attention to stern looking Sam Dede. Before then, he had done My Father's Promise but the movie did not fly. Blood Money gave Sam Dede the opportunity he had been looking while the viewing public had something different from the usual to enjoy.

Ever since, there has been no looking back for the man that trained the likes of Charles Okafor, Hilda Dokubo, Rita Dominic, Ejike Asiegbu and others at the University of Port Harcourt.

If people took note of Sam Dede with Blood Money, Isakabba made him turn to a hero among his folks and fans of Nollywood. In Isakabba, Sam Dede played the role of Ebube, the charismatic leader of a vigilance group that went all out to deal terrible blows to men of the underworld without regard for due process. He played the role so well people started calling him Ebube.

To achieve such a memorable outing, Sam Dede had to do what the present days actors don't do, he got into the character of Ebube. It is one thing to get into a character and it is another to play that character. “First of all, the way the character was portrayed was like a trader gathering other traders to form a vigilance group, but I felt for the things the group did to be convincing, the character had to be somebody with some kind of charisma, serious-minded, mobilizer, who could mobilize people to follow him.

That was the taking-off point. To be sure I was in the character, before I got to the location, I had built up the character and discussed with the director how I wanted to play the role,” Dede disclosed in an interview with a national newspaper. That is something we don't get to see these days. And till date, Sam Dede says the movie remains the 'most prominent' of his movies. In his words, “well, till date the movie, Isakabba remains the most prominent of all the movies that I have done. And my character in the movie had become my second name, Ebube. Everybody is crazy about that name. I think it was a good name.”

We hardly get to see the actor these days and it is due to these dual reasons. According to a close source, Sam is deriving much more joy from lecturing than acting. 'It is not that he has abandoned acting. If you have a convincing script, Sam will follow you to location the next day', our source said. Quoting Dede himself in the said interview, he said he loves lecturing because it's thrilling watching young talents grow. “I like lecturing because it is just a fascinating thing to watch young guys come into Year One and watch them go through it all to Year Four and they are ready for the market.

Unfortunately, some of them get out there and one or two things do not allow them to continue. But I have trained many actors that are well known. They are Hilda Dokubo, Rita Dominic, Charles Okafor, Ejike Asiegbu, Bob Manuel Udokwu, Francis Duru and many others.” What better joy could a teacher ask for?

What happens now is that everybody thinks his or her right way of doing things is the best. Nobody wants to learn the ropes. Everybody thinks of himself or herself as the star. I believe our movies can be better if we think or act professionally.” That is not all from the teacher of the art. He feels that the right investment would enhance the fortunes of Nollywood. “The second point is that we do not have right kind of investment.

Don't be fooled by the tough talk about the industry, Dede has a life outside of the camera. He got married in 2001 and as at 2005 has had two children one of whom he named Denzel after the great American actor, Denzel Washington. “I got married in 2001 and I have two children. My little girl watches movies and try to say the lines. The boy is still very small, but he is named after Denzel Washington. Maybe he is going to live up to the name, I don't know, that is up to him”.

Sam Dede is like the Al Pacino of Nollywood. He acts, directs and teaches the art of acting. Once a lecturer at the University of Lagos, Sam now looms large in the classroom at the University of Port Harcourt. He once said in an interview that he trained the likes of Hilda Dokuboh and Rita Dominic who are very popular actresses in Nollywood. The heavily built actor has done over 30 movies and directed over 10. One thing the Sam Dede fans know about him is that if Sam Dede is in a movie, it must surely be a hit. Perhaps that accounts for why we don't see much of him nowadays.

Hit movies are no longer coming out of Nollywood, so there is no reason to have 'hit' actors such as Sam Dede on a cover of a movie jacket. Among his notable flicks are: Mission to Nowhere (2008), Mission to Nowhere 2, Be My Wife (2007), Be My Wife 2, The Preacher, Darkest Night, Darkest Night 2, Bumper to Bumper, Bumper to Bumper 2, Die Another Day, Die Another Day 2 (2004), Foul Play, Never Die for Love, Never Die for Love 2, No One But You, Paradise, War Front, Adam & Eve, Desperadoes, Desperadoes 2, The Last Vote (2001), Ijele, Isakabba and so on.

We know Sam Dede loves teaching, but for the sake of his fans who voted for him overwhelmingly when we asked them to name whom they missed most, we are hereby requesting that he should make a come back to our screens even if it's just once.
He got 908 votes ahead of RMD who got 812, Saint Obi, 301 and Charles Okafor, whom he trained 67 in a four-week poll conducted by http://nollywoodgists.com