Growing up without a father made me tough— Van Vicker 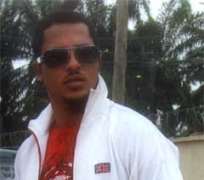 Van Vickers is surely a great actor who has made waves home and abroad. A man of multiple nationalities and a lover of good things, Van Vicker is happily married to Actual Van Vicker, his friend of over a decade years and they have three lovely kids.

With a Ghanaian / Liberian mother and a Dutch father whom he lost many years ago, this fair skinned actor shares his experiences on working with Nigerian artistes which he describes as fun. He also confesses that featuring in Nigerian movies has added to his profile.

How are you enjoying Nigeria?

What is the attraction for you in Nollywood?
No doubt, Nollywood has gone far and it has been there for a good number of years and people recognise it world wide. So there should be interest there because it would add to my credentials and give me further exposure.

It was a producer that contacted me. It all started with Kingsley of Divine Touch Productions. They had strong links with Venus films and the movie 'Beyonce' was the very first one that we marketed here.

Kingsley called Nadia and I up to do a film and we did it with Ini Edo, Olu Jacobs and Mike Ezuruonye. That movie was the first that I did in Nigeria. But before that film came out, he had promoted the Beyonce and that is where it all started from.

How has it been working with the Nollywood artistes?

Comparing Nigeria and Ghana movie industry, what would you say is the difference?

People here are more concerned about how soon you finish production as much as they are also concerned in Ghana about how fast you can be. But here the emphasis is more on how soon the production will end. In Ghana, they are a little laid back. Not that they don't want to finish, but they have their own problems. Honestly, I think may be it is because of the level of experience, they are more on point here than in Ghana.

On that negative difference, I don't think there is any one different from what is obtainable every where. Sometimes you go on location and it's not ready. I have not seen anything negative to compare. Positively, they are more on point here and better organised than what you have in Ghana.

Advance planning is another good point for Nigeria. Producers will come to you and say I want to shoot on this date and at this time, but in Ghana, it doesn't really happen like that. I'm speaking from my experience and not about the people.

With Ghana, they will just come and say I want to shoot next week and I'm like it is not going to happen like that and that is why it seems I have not featured in many Ghanaian movies. It's not that I don't want to do it but because the time frame most times, is usually too short for me. They have come to realise it, so I do have some up front bookings to shoot in Ghana in April, May and June.

How did it all begin?

In 2003, a guy approached me to do a television series, The Sun City which I think was aired here for a while. He offered me a role and I saw it as a new challenge and we did it. Not long after Venus Films came to me, they want to do a film and they gave me a role and I said, okay, let's do it and we did it. The title of that movie was Divine Love.

Six months down the line, we did another one, 'Mommy's daughter' all in Ghana and six months after, Darkness of Sorrow followed. And when we did Beyonce everything just blew up. Calls started coming in from everywhere but I think it was Beyonce that gave the big break because once that movie came out, there were calls coming in from left and right.

So that was how it all began. I had no idea I was going to do this but I'm enjoying it and I think I have always loved entertainment since I started doing it in 1997.

There is this article about you and your demand for rights to buy movies; can you throw more light on it?

Yes, apart from acting, I do other businesses like buying rights of movies.

I think the article you were referring to was the one that says I demand for right of movies for me to feature in the rmovies. But that is so untrue because which producer will produce a movie and give you the US right?

What was your growing up years like, where did you grow up?

Growing up for me was a mixture of places. I grew up in Holland, Libreville in Liberia and Ghana. I have been trekking in London, Holland, Ghana and Liberia and that was the reasons why I have not been really able to catch the local languages; It is because I really have not settled long enough in these places.

So you can not speak the Ghanaian language?

So what are you doing about that?

Well I try learning, but it is difficult. I think I have passed that level where I can catch languages except I go to school for it. Apart from that, I don't think I am very much of a language person. I'm sure, if I was a language person, I'd have made effort.

Talking about your skin color, are you fully Ghanaian or of a mixed race?

I am very mixed. My dad is Dutch from Netherlands and my mother is partly Ghanaian and partly Liberian. So I have a mixed background.

So the Ghanaians just hijacked you and your nationality?

Well, Liberians are also laying claim on me. I was there in December 2007; they are also claiming their rights. It's only in Netherlands that they have not bothered. I mean, it is fun when I'm amongst Liberians, I' m a Liberian. And when I'm in Ghana, I'm a Ghanaian. When I go to Holland, I'm Dutch guy. It is very interesting.

Did you grow up with your parents?

I grew up with my mom and dad but my dad passed away when I was six. He was an Electrical Engineer. So I have been with my mom ever since. She is still alive. She went to Liberia only last year. I also have an older sister who is my only sibling. She is married and resides in the US with the husband and two kids.

How does it feel to grow up amidst ladies without a father and a brother?

You have no idea. Growing up without a father and without a brother amidst women was very tough. It made me strong and determined. It made me stay focused on things I want to achieve, and if my father was around or I have a brother, it would have been stronger. Their absence in my life gave me an extra zeal to get the things that I want.