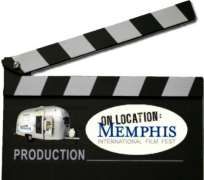 The film, directed by Mr. Femi Odugbemi, will along other films be screened at the festival which has evolved into an internationally recognized gathering for movie makers and performing artists from around the world.