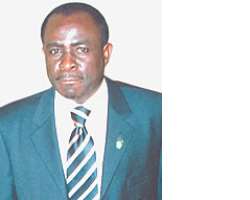 THE Nigerian Copyright Commission (NCC) has, again, in an anti-piracy raid, caught Akina Music International Limited (formerly Benrit Outlook Ltd) in the process of illegal mass production of suspected pirated products. Three arrests were made, namely: the Managing Director, Mr. Sook Allen, a Chinese national from Hong Kong who has made statements, and two factory workers.

The optical discs plant which will soon be charged and prosecuted for piracy of copyright protected works had similarly been raided by the Commission about four years ago and is currently being prosecuted at a Federal High Court in Lagos for piracy of musical works and cinematograph films.

Director-General of NCC, Adebambo Adewopo, who disclosed this in Lagos on Thursday April 2, 2009, indicated that the Commission would soon mete out an appropriate sanction, as prescribed by law, against the infringing plant to serve as a deterrent and a clear signal of the Commission's zero-tolerance against piracy, in line with its Strategic Action Against Piracy (STRAP) programme, particularly sequel to the implementation of the Copyright Optical Discs Plants Regulation of 2006.

The Commission, following the report of high incidence of optical piracy, had, recently, released the Optical Discs Regulation (ODR) and consequently focused on regulation, monitoring and inspection of CD plants in order to check the illegal replication of millions of CDs, VCDs and DVDs being mass-produced and distributed into the market. This has brought the Commission headlong in collision with the replicating plants which had, for years, remained unregulated.

According to the Director-General, the operations carried out as a first instance on three replicating plants, namely Sky Media Limited; Ecomax Media Nigeria Ltd; and Akina, were executed in accordance with the Optical Discs Regulation 2006 as a compliance measure to enforce best practices in the optical discs production industry in order to curtail high incidence of piracy in Nigeria. There are, at present, 12 replicating plants registered with the Commission, and which have been brought under the ODR regime.

Represented by the Zonal Manager of NCC Lagos Operational Office, Mr. Emeka Ogbonna, the Director-General noted that the night anti-piracy operations were unprecedented and serve as a clear indication that there is no hiding place for pirates, be it during the day or even at night, as intelligence available to the Commission indicates an unmitigated illegal production of regulated products at nights to evade the Commission's oversight, in recent times.

The Commission's surveillance reports show a tendency for piracy activities to be perpetrated mostly at nights by pirate replicating plants. The three recent raids by the combined teams of Copyright Commission and Mobile Police operatives lasted from 11pm on April 1 to 4am on April 2, 2009. It is recalled that the Commission had in April 2007 in alliance with the Economic and Financial Crimes Commission (EFCC), raided the same Akina plant during the day but found no evidence of piracy.

“This is the first night operation that the Commission has undertaken to address the nocturnal strategy for perpetuating piracy in the country,” the NCC boss stated, adding that the copyright industries should expect more of such surprise enforcement measures in line with STRAP.

Copyright Inspectors had swooped on the premises of Akina Music International Ltd, unannounced but encountered a barricade for a while during which night workers frantically evacuated implicating evidence from the plants but unsuccessfully.

On gaining entry, Copyright Inspectors found that three out of the four installed replicating lines were running, ostensibly without the production of any optical disc products on sight. A critical search of the premises, however, revealed stowed-away, freshly produced suspected pirated products and stampers which were consequently confiscated.

The impounded products were mainly musical and movie products on compact discs and video compact discs. The musicals were compiled mix of foreign and local works on each CD product. Among the confiscated products are the illegally replicated works belonging to D-Banj, Darey, Ikechukwu and several other local works that formed part of the variety of audio mix with a number of foreign works.

An inventory of impounded products signed by both parties includes over 20 stampers allegedly submitted by Akina's clients for replication of protected works; 40 cartons of suspected pirated works, each of which contains 1,000 CDs; and 10 spindles of recorded works.

Investigation is still on-going. Having made useful statement, the international passport of Akina's MD, Sook Allen, has been confiscated while he has been released on bail on condition that he reports at three days' interval for further investigation until the case is charged to court for imminent prosecution.

Meanwhile, the Director-General has expressed concern that this trend of massive piracy has cost the creative industry a huge loss over the years and has become the bane of its growth. Adewopo called on the stakeholders to join the Commission's efforts in fighting this scourge to a standstill.