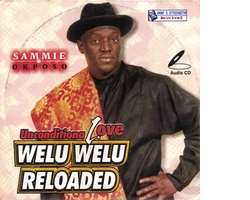 Sammie Okposo is currently in a state of grief due to the death of his aged father.

It was gathered that the incident, which happened in the first week of April shattered the voice-endowed personality after the news was broken to him.

Information revealed that the news was kept away from Sammie for three days after the incident because of the impact it would have on him.

A source also said that the information was also kept away from him so that he won't be distracted from his much publicised and sponsored shows during the Easter season.

However, the news was broken to him amid pity by some family members on Sunday April 5 and he was said to have wept uncontrollably.

While the death was said to have shattered the singer, who became famous after the release of his hit track, 'Welu Welu,' it didn't deter him from going ahead with the shows he has billed for the Easter period.

Sammie is a voiceover artist and singer, who has also been linked with several celebrated women among which is Gloria Ibru, who had a daughter for him.