AMAA 2009 'project' was a waste of government funds 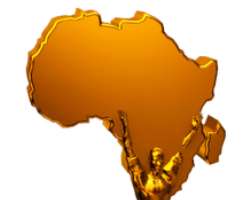 The fifth edition of the annual African Movie Academy Award (AMAA), which ended last Saturday night, April 4, in Yenagoa, Bayelsa State, sprang up surprises among the audience. Many least expected the outcome of the award ceremony. The fiesta saw films from other African nations dominating their Nigerian colleagues. Stakeholders in the entertainment industry were in agreement that the awardees deserved the feat, given their hard work and commitment.

However, the hosting of the event had attracted negative comments from concerned Bayelsans, who alleged that the 'project' was a waste of government funds. They argued that the N70m used for the function would have been channelled into paying teachers salary and other meaningful ventures. But, Director General of the State's Tourism Bureau and Publicity, Nathan Egba, dismissed this view, insisting that the hosting of AMAA would go a long way in showcasing the rich cultural heritage and tourist potentials in the state. Egba maintained that the state would reap the benefits of AMAA in future.

At least, artistes and producers from 11 African countries, including the Nollywood members such as Olu Jacobs, Joke Silva, Ejike Asiegbu, and other numerous guests thronged the expansive auditorium of the Gloryland Cultural Centre situated on Ovom to grace the award ceremony. Night crawlers from Bayelsa and neighbouring states also besieged the venue to experience what they knew best.

Stand-up comedian, Julius Agwu and Kate Henshaw-Nattal were co-comperes of the function, attended by Governor Timipre Sylva and other top government functionaries. Agwu as usual, displayed his ingenuity with rib-cracking jokes that arrested the audience. Selected musicians were not left out at the function.

At the award ceremony, A Kenyan film, From a whisper directed by Wannri Kaliu won five choice prizes, even as the Nigerian entries that had earlier dominated the nominees' list crumbled to the surprise of Nigerian spectators. The movie won the best director, screenplay, picture, original soundtrack and AMAA achievement in editing in categories that had Nigerian entries such as Tunde Kelani in the film Arugba, Tchidi Chikere Beautiful soul and Modupe Teni. Incidentally, nobody won the best-shut film.

Again, South African film, Gugu and Andile, Egyptian film Seventh Heaven and Ugandan film Battle of the soul floored Nollywood entries, as best performance actor in a leading role and best performance actor in a supporting role, including AMAA achievement in visual effect. There was reprieve among Nigerian audience when Funke Akindele won the best female actress in Jenifa film, while Tunde Kelani won the AMAA achievement in costume and non-continental best for Nigeria scenes.

Best performance actor and male actor was clinched by Egyptian-born artiste, Farouk Alfishawi in a film titled Seventh Heavens. Izu Ojukwu, defeating Stephen Okereke, Stella Damasus, and other artistes, won the best cinematography in Cindy. Nigerian filmmakers may likely redouble their efforts in winning choice prizes in the next edition of AMAA. Analysts say their performance in the recent award was not quite encouraging.

In his comments, Governor Timipre Sylva tasked filmmakers in the country and beyond, to take advantage of the state's rich cultural heritage and tourist potentials by investing in the area. Sylva said films could be shot at several locations that are many in the state, to showcase its rich culture and tourism potentials.

While arguing that the state depicts a typical African setting with fine beaches and rich mangrove forests, the governor said the move would go a long way in promoting the state tourism potentials, as well as providing employment for the people. Sylva observed that the movie industry was a vibrant business, saying that AMAA was a veritable platform in uniting the people of African descents in the Diaspora.

The Governor assured that the hosting of next edition of the movie academy award would be better, as government would have put in place the necessary infrastructure to make it more successful.

"With the issue of militancy coming to an end, Bayelsa will witness unprecedented development. I commend President Umaru Yar'Adua for granting amnesty to all militants," he said.

Earlier, Chief Executive of AMAA, Peace Anyiam-Osigwe, expressed appreciation to Sylva for taking the annual movie award to the present level. Anyiam-Osigwe remarked that it was imperative for Africans to tell their own stories to the globe, in a bid to change the wrong perceptions before the developed countries of the world.

The AMAA boss paid tribute to the late celebrated musician, Mariam Makeba, Francis Agwu, Kwame Ansah and other moviemakers, who passed on during the period under review.

One of the awardees, Funke Akindele, acknowledged that she attained her feat by dint of hard work. She dedicated the award to God and her crew.