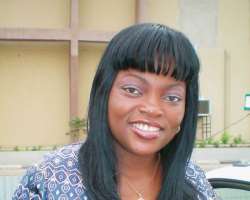 NIGERIA's Funke Akindele has been named by the jury of the 2009 edition of the African Movie Academy Awards (AMAA), as Africa's best actress in a leading role.

Akindele was the jury's choice out of six other actresses nominated in that category, including a Ghanaian and Kenyan. Although, the actress, who interpreted delightfully the role of Jenifa, the lead character in the movie of same title, was not present at the award ceremony at the Integrated Glory Land Cultural Centre in Yenagoa, Bayelsa State, a resounding applause greeted her declaration as the continent's best actress for this year.

But it was Kenyan's day at the award, which was witnessed by Governor Timipre Silva and members of his cabinet. The Kenyan filmmakers made it up the dais five times to receive the highest number of awards of the evening.

From a Whisper, the movie by Kenyan Director and Scriptwriter, Wanuri Kahiu, which commemorates the 10th anniversary of the infamous August 7, 1998 terrorist bombing in Kenya in which over 250 people died and 5,000 were injured was adjudged the best African film for 2009.

The movie, which examines the aftermath of the bombing on the lives of the indirect victims of the blast, also got the award for the best screenplay, best director, best editing and best original soundtrack.

The award night also featured stand-up comic acts and musical performances. Filmmakers from South Africa, Uganda, Burkina Faso, Rwanda and Niger Republic also got rewarded for their artistry in the make-belief world of the movies.

South Africa's Gugu and Andile got the awards for best promising actress and actor category as well as the best film in African Language.

Uganda received the award for the best film with visual effect with its only entry Battle of the Soul, while Burkina Faso got garlanded for the best animated film with Justin Zerbo's Kono.