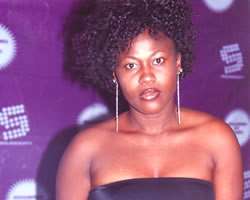 When star actor, Emeka Ike came calling at the corporate headquarter and he was asked to describe certain actresses, it was only Uche Jombo he described as 'superlative'. Whatever he meant, we don't know. But one thing we know very well is that the super actress and PGD holder is still very much single.

We had thought Uche would follow the footsteps of her colleague, Thelma Okodua who got married recently and had fixed an April date for her church wedding, but Uche told us marriage is not something she has the power to bring about.

'It will happen when it will happen or are you going to marry me Samuel? I can't tell you there is a plan for marriage in 2009 or not. Some things are in the hand of God'.

Uche, however, reveals that she has a man in her life who is making her happy. But one thing the man has not done is pop the golden question. 'If you are asking whether I have a man in my life, that is a different thing from marriage. I have a man in my life and I am okay with him. And if what you want to know is whether he has proposed, he hasn't.' That means the man hasn't asked our star actress to marry him. Of course, she won't reveal the identity of the man but hopefully she would disclose much more very soon.