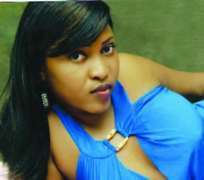 Fresh face Nazareth Jesse popularly known as 'Naz' was not born with a silver spoon in her mouth. But determined to make it in a world of uncertainties, she knew hard work was her only route to success. And for her, success was not an option; it became a matter of survival to help feed her family.

Luckily for her, on life's journey she met a few people who propelled her into her destiny of becoming a movie star. In 2007 the Abuja based star wooed movies audience us with her role as Joy in the movie Girls' Cot. Nazareth has continued to put her fans in a trance with her powerful performances, returning again this time in Stanley Ebonine's yet to be released blockbuster movie Fear Not.

The sultry Abuja actress had a chat with Aishat Barkindo on different issues and why she had to spend 10 years in three different schools to get a Higher National Diploma. Read On:

You look so innocent and young. How old are you?

(Laughs heartily) Any woman that tells you that can tell you anything. Beware of her! A woman should seem quintessential. Never tell all, yet remain graceful. Anyway I am over 25 years old.+

What motivated you into becoming an Actress?

The passion first, then the need to try to make some extra cash to help train my younger ones. Most people don't know this about me, but growing up was tough. I was the first of six children. Dad was a hall porter at a polytechnic and mum was a petty trader. I had to hawk foodstuff on the streets for her. Now when I look at where I am coming from to where I am now, I know God has really been faithful to me.

Your name seems to be on the lips of every Abuja big boy as the one to 'take home to Mama.' How does this reconcile with your being an actress?

Men love fantasies. But still am flattered. My roles at times tend to reflect my true nature of gentility, calmness, all essence of being a true African queen, so naturally men get attracted.

Over 20 movies and still counting

I taught you would never ask. I am from Rubochi village in Kuje Area Council in the Federal Capital Territory. So I am Gwari by tribe. But growing up days were spent in Bida, Niger state. I attended Government Girls' Day Secondary School, Bida after which I spent close to 10 years trying to get a HND because of constant sexual harassment by some of my lecturers. Some would even want to have you in their office. I finally graduated from the department of Business Administration and Management after attending up to three universities. It wasn't easy. Government should do something about some of these lecturers.

What of sexual harassment in the movie industry, that is Sex-For-Roles demands made on actresses?

Honestly Aishat, it's not as prominent as experienced in the universities. Those students are really going through hell. In the movies, the stakes are higher for the girls, you could either walk away or say no. In the university you could be like me, insist on “no” and go through school for 10 years! Sanitizing the schools on this issue should be one of the Seven Point Agenda for Mr. President. I get more surprised when I read about sexual harassment in the movie industry.. I think most of these producers and Directors are the most harassed. Some actresses just for roles entice them by knocking at their doors at night and wearing nude dresses during the day. And you know these are 'men'.

What is the most challenging role to date?

Ha! Having to play the role of a crack up prostitute in the movie Love and Likeness.

How do you see the issue of lesbianism in the industry?

I prefer men honestly, so I don't know how to answer that question. It's their choice and their body.

There is gist in town that a very powerful South-South Governor is madly in love with you?

(Smiles shyly) Honestly every man has the right to fall in love with a woman but it depends on the woman to reciprocate. I should say 'no comment' to this question.

Have you ever been hear- broken?

Not really, but I used to go out with Chidi Mokeme a.k.a GQ till I found out that we were too many for him to count so I bailed out. Then there was Jim Iyke, we were not lovers but very close, he could advise me like his younger sister. Chidi actually brought me into the movies in 2004.

I've learnt to make some “me-time.” Sometimes I get so busy that I don't even remember to eat. Then I get selfish for “me”. I always try to figure out those moments when I have to take some quiet time to reflect and breathe. I think for everyone it's important to recharge yourself, whether you're lying on the sofa, soaking up in the bath tub or hanging out with people you love, or you're just walking around enjoying God's beauty.

How do you see Nollywood in the next 10 years?

Ten years is too far. Nollywood will be the toast of the world in the next five years! Nigeria is a blessed country, with all our inadequacies, good things always happen to us. I'm especially happy about the way Globacom is trying to use Nollywood actors for endorsement.

What is favourate dish?