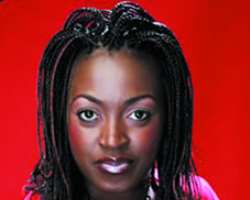 Kate Henshaw-Nuttal is one actress who has not only cut her teeth in the acting world but also has continued to impress her fans with her simple and humble nature.

This was displayed at the premises of Basorge Tariah junior, who hosted friends, families and colleagues to his daughter's birthday at his GRA home in Ojodu last weekend.

Henshaw, who breezed in from the UK a day to the event, made it and won the hearts of many as she was seen everywhere personally sharing food and drinks to the surprise and admiration of all present.

Both Henshaw and Basorge were a delight to watch during the rested soap opera, Candle Lights, where Basorge played the role of Do Good and Henshaw, Emem.
The current AMAA best actress of the year may still clinch the coveted prize next month in Bayelsa State.