Olu Jacobs is Made in India for Papa Ajasco 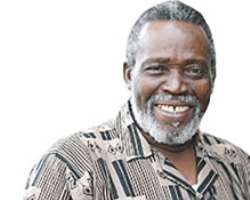 The face of Nollywood star, Olu Jacobs is set to grace the popular television comedy series, Papa Ajasco and Company. The veteran actor will be featuring in the new series of the programme entitled Made in India.

Jacobs, who's playing the role of a Vice Chancellor in the series, says he feels good working with Wale Adenuga, the producer because “the script is treating a prevalent issue in our campuses”.

Made in India dwells on the nagging issue of sexual harassment in the campuses, with the attendant tug of war between the lecturers, who indulge in it and the authorities that are equally bent on sanitising the system.

“It is a good script, because it's been a relentless war, quite traumatic for the female students. Some struggle to pay their school fees only to be harassed by some lecherous lecturers or cultists,” Olu Jabobs adds.

The actor commended Adenuga for his creative ingenuity, and the subtle but consistent way he highlights the ills in the society and proffers solution through his drama programmes.

“I have always been a fan of Wale Adenuga right from the days he was publishing the hilarious magazine, Ikebe Super. He's a hard working and dedicated artiste, who infects people around him with the same kind of joy and excitement,” he states, adding, “Wale Adenuga is a detribalised Nigerian who where you come from does not matter to him but the creative talent in you,”

Made in India, which would make its debut on screen soon parades adept role interpreters like Nnena (Yinka Olukunga) of the Super Story fame and a host of others. The programme was directed by ace director, Bolaji Dawodu.