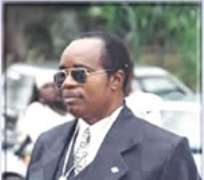 The Guitar Boy, hit-track master and international envoy of culture, Sir Victor Efosa Uwaifo, says he is music itself. He believes it and is proud... to announce to anyone who cares to listen that he has no match in the industry nationally, continentally and across the globe.

In an interview with the Nigerian http://nollywoodgists.com, Uwaifo declared, proudly: “I am my role model. I have reached a point that everybody looks up to me. I have achieved, I'm fulfilled. I have arrived and nobody anywhere in the world has done what I have done.”

His career as a musician began at age 12 when he started to play the guitar as a school boy. This was more like a puzzle to his parents, the late Princess Idusogie (mother) and Wilfred Uwaifo (father) and, even, among his peers. But he was undeterred in his mission and vision. The desire of his parents that he pursue his education without distraction was never ruined by the zeal to make music his best in life. The multi-talented artiste, designer, painter, philosopher and poet, is also a sculptor of repute. While going to school, he told his parents not to worry as he hoped to keep the family flag flying irrespective of their fears.

“They (parents) were really late but at the early stage, they were skeptical. I was still in primary school when I started playing guitar. I promised my parents that I would fly the flag high and do them proud by reading my books.” Knowledge, he says, is learnt from the mastery of the alphabets ABC…etc while achievement and perfection go with mastery and application of a sense of purpose -- being yourself, standing for the truth, giving joy to a great many people, watering one's mind to allow it bring out the innate joy and radiate without holding one's potential.

Victor Uwaifo never let his parents down even unto their death and kept his track towards the realization of his dream education career. ”I did well, I never let them down. I even have to eulogize them in their grave. Even in their grave today, they will be so happy that their son had done well and had done more than they expected. So much, so much, they were not actually aggrieved at my going into music.”

Born on March 1st, 1941 in Benin City in the Old Western Nigeria, which metamorphosed into Mid-West state, Bendel State and now Edo State, Uwaifo attended the Western Boys High School and Saint Gregory's College (1957-1961). He has a National Art Diploma (Distinction) from Yaba College of Technology, Lagos, (1961-1963). Desirous to give meaning to the career he cherished so much, Uwaifo proceeded to the University of Benin where he bagged his First Class in Fine and Applied Arts (1993-1995) and later got his Masters in Fine Arts (MFA), (1996-1997) respectively. He is married with children

Sir Uwaifo came to fame with his numerous hit tracks that kept the world aflame. Among these are the Joromi, a Bini mythology that was developed from the folklore of the ancient Benin kingdom. This track was given a new rendition and made danceable with hot rhythm, well-articulated style, melody and musical accomplishment, or what ordinarily is flesh and blood. It sold over 100, 000 copies within weeks of hitting the public stand. These qualities brought the release to international limelight and it sold endlessly. Also, the sizzling Guitar Boy, saw the man behind the mask as a mystery and a fearless actor of the time. Guitar Boy, he said, was about an esoteric encounter with a mermaid. The track came when it should. Africa is full of history and folk tales. The wonder boy's musical encounter with the mermaid followed the midnight visit to the dreaded river where it was strongly believed then that power, wealth and others came from. Sir Uwaifo could not allow himself to be defeated only by what he heard but wanted to have a personal experience. He did and what he saw became his musical narration. However, he never returned the same without a fruitful bargain with his hostess in an exchange of melodious rendition to the water goddess. The story is full of simulation of sight and sounds of the mermaid encounter.

“As for the Guitar Boy, the story is there. It is about my encounter with the mermaid. It was esoteric in the sense that it was a privileged knowledge and it is all told and I tried to illustrate that encounter in cultural form,” he says.

The Oredo local government area star in Edo State said the centre, which to a first visitor, elicits the good, the bad, the ugly and the beautiful, is for the world, Africa and Nigerians at home and in the Diaspora.

The edifice harbours a great deal of choices of what tourists can lay hands on for relish and relaxation, as some of them raise pertinent questions and provide on-the-spot answers. Lined up in the man's hall of fame are the aesthetic flight Boeing 0891, multiples of awards, the dual-purpose single guitar with piano, the double guitar, pictures of greater leaders and men of history, war and nobility and the historic slave circle. Also on display are the Eyon mask, the seven-headed spirit of charm and death, pigeon hole of human sacrifice and dreaded ancestral shrine, the deadly city of blood, souvenir shop and the play-it-yourself studio and a whole lot of unseen forest-like birds.

He spoke about the motivational spirit behind his successes and supposed regrets. “I never missed anything. Every action I took in my life had been from my soul. Every initiative was originated from me and I planned my life and I followed the plans conclusively,” he said. This, according to him, was in line with the firm belief in the philosophical saying: a work planned is better than no plan at all.

“Even if you plan, if it is not good, it is better than you didn't plan,” he said.

The Ambassador of Culture maintained, with emphasis, that he has no place for any form of regrets as he is in charge for all his actions. “I have no regrets in my life at all. I have taken possession. I have been in control of my life decisions. Time runs after me, I don't run after time. They say time is against us; I am against time. I have a lot of things to occupy time. So I take decisions and any decision I take is a springboard to another level,” he said.

The gifted Ekassa, titibitti, Akwete Mutaba, Sasa Kosa-musician has used all his skills to expose the culture of Binis to the outside world. However, he could not hide his feelings about the violation of music forms and structure by the present crop of Nigerian and African musicians. The artistes, he said, are scratching the surface of what could be called real music, due largely to what he described as foreign influence. “They are just scratching the back and surface. It came before all these foreign influence. They come with soul music, pop, swing and they have come with reggae and they are all foreign,” he said, insisting that all these would fizzle out after a time. To Uwaifo, home-groomed music can stand the test of time and the artistes are people who are well-grounded in music and “can make a living out of it from cradle to grave. But the younger ones in the industry, music is like fashion to them.”

The missing link, he noted, is that “they are not groomed in real music, most of them have not been to any school of music” adding: “computer has ruined them”. Again, he lamented that poorly co-ordinated music had caused more havoc than the enjoyment. “Music malpractice is just like examination malpractice,” he said.

Uwaifo added: “The problem is that when they want to play music, computer will arrange it for them. They are not the ones who actually played the music, and that is mediocrity.”

The legend provided the way out of the mess in the entertainment and music industry, saying: “Nigerians should be original. They should not encourage mediocrity and forget about cut and paste. They should learn to play musical instruments; and then have role models.”

He added that budding artistes “should work assiduously. They should have a sense of purpose and not run after money. If they really love the art, they should develop the art in them and then money will compensate them”.

His achievements notwithstanding, music has not stopped running in Sir Uwaifo's blood. He still has the charisma and the strenghth to give his best with the flute, piano and saxophone.