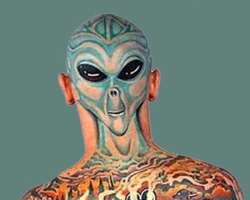 A tattoo is a puncture wound, made deep in the skin and filled with ink. It is made by piercing the skin with a needle and injecting ink into the area, aimed at creating some sort of designs.

What makes tattoos so long lasting is how deep they are. The ink isn't injected into the epidermis (the top layer of skin that you continue to produce and shed throughout your lifetime). Instead, the ink is injected into the dermis, which is the second and deeper layer of skin. Dermis cells are very stable, so tattoo is practically permanent.

First tattoo ever can be traced to Africa in Egyptian culture in 2000 BC. They were then referred to as body art of symbols representing sun worship and religion.

In the Nigerian culture before the advent of civilisation, body arts were seen on men and women that are chiefs, warriors and tribes as a sign of what they represent.

Tattoos then were mostly temporary and manually done. The colours used were gotten from flower petals and plant roots, while some used soil chalks.

With time, civilisation reduced its existence. From early 1970s to late 1990s, tattoos were not seen among serious-minded, fashionable ladies and gentlemen in Nigeria.

In those days, tattoos were seen on mostly men and very few ladies, who were gangsters, musicians or cult members as their group insignia or sign of membership. And for this, people with tattoos were seriously frowned at.

But now, tattoos are making waves in fashion and are now seen more among ladies than men. In every 10 fashionable ladies, two have a tattoo.

A new tattoo is also a wound. Like any other slice, scrape, puncture, cut or pierce on your skin, a tattoo is at risk of infections and diseases. If you're prone to getting keloid (an overgrowth of scar tissue in the area of the wound), avoid getting a tattoo.

Tattooing involves injections under the skin and viruses such as HIV and hepatitis B and C can be transferred into your body if proper precautions and sterilised are not done.

Removal of tattoo can be expensive. Depending on factors such as size and design of the tattoo, removal can cost significantly more than the tattoo itself.

Laser tattoo remover is usually effective for the most part and there can also be some side effects. The area can become infected or scarred and it can also be susceptible to hyper-pigmentation, which causes the area where the tattoo is to become darker than the normal skin or hypo-pigmentation, which makes the area to be lighter than the normal skin colour.

All these are not to scare you off tattoos but for you to have your eyes open while rolling up your sleeves for tattoo.

However, not everything that is in vogue in fashion is good for everybody because just as our faces differ, our skin type and immune systems also differ.