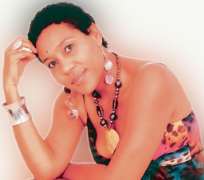 She's been controversial ever since she hit limelight via the silver screen. She has played several scintillating roles while adorning skimpy dresses which raised eye-brows. Off screen, the breakdown of her second marriage some years ago was intriguing and sensational.

And lately, there are speculations that she's romantically involved with a younger guy.

But Nollywood star actress, Shan George, has sensationally stated that there is absolutely nothing wrong with dating a younger man.
In an exclusive chat with http://nollywoodgists.com, the star of Connected Firm, who started out in the make-believe world in 1996 when she was a student of Mass Communication at the University of Lagos hinted that age has nothing to do with it.

Shan's fans would recall that the celebrity actress parted ways with her London-based ex-husband, Tony Nwosisi, in 2006. The union was highly celebrated in the media with Shan declaring that she had finally found the man of her dreams. That was before the union crashed like a pack of dominoes.

Back in the day, in her quest for education, she had dumped her first marriage, which produced two boys after her first husband broke his promise to send her to school. Shan had fled to Lagos and after a hectic time secured admission to study at Unilag. Today, she is pursuing her master's degree.

However, she did not open up on who her current man is or her expectations from the relationship.

Though a dozen movies are churned out of Nollywood everyday, which critics describe as insulting the intelligence of the viewer, Shan does not agree totally with this.

According to the actress, who has played fascinating roles in many movies over the years, “we have better movies now than we used to. I know that there are some wishy-washy movies but there are also many good Nigerian movies.”

Shan, the only child of a relationship between a Nigerian mum and a Caucasian dad, Gordon Walker George, grew up a total village belle in her village in Eastern Nigerian and was single-handedly raised by her mum after her dad passed on when she was just a baby. She was married off by her mum at the tender age of 16.