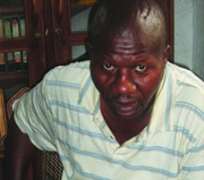 He has been at the centre of several rumours and may have been away from the screen lately but Alhaji Babatunde Omidina popularly known as Baba Suwe has revealed his intention to revive his career.

The popular Yoruba comic actor speaking exclusively to http://www.nollywoodgists.com at his Ebute Metta, Lagos office disclosed his intention to bring back his comedy sitcom, Erin Keke as well as release a new movie.

He explained his absence from movies lately while also dispelling rumours of peddling cocaine and being ostracized by the acting community among others.

My absence from movies
About two years ago, as one of the executives in ANTP precisely the National Treasurer we all agreed to go on break. So I took my family to London for the holidays. Meanwhile, about that time also the industry witnessed an unprecedented mass production of movies. I think during that time the industry have produced anything less than 100 movies but I was away. However, some of the movies took a long time to be released. But when I returned home from the holidays, I couldn't meet up. Also, I have many other engagements to compere different shows such as weddings, burials and so on. So when the movies produced during those periods people didn't see my face in the movies produced during the period, they assumed I was already out of business. However, things are changing. I am currently the National Treasurer of ANTP and former governor of the Lagos Chapter and so there is no disparity between me and the association.

Competition from younger actors
I don't believe I am competing with anybody. If I see someone perform well, I will openly commend such a person. If you look closely, you would find out that most of what young comic actors of today do are things we have done the past. One feels disappointed at some of the comic movies we see these days.

But I don't feel threatened by these youngsters at all, they are not disturbing me and I am not disturbing them. Comedy is broken into various arms such as Apara, Afe, Asa among others. Today everything has been muddled up whereas there are different aspect of comedy. For instance most of the stand up comedians of today can hardly play a comic role in a movie. Moreover. Nevertheless forerunners such as Baba Sala, there is no one that can brush Baba Suwe aside when it comes to comedy in Nigeria.

My current projects
The last two movies I did where not comedy per se but my current project is a purely comedy movie. However, it is filled with moral lessons for people to learn from. No matter how funny it is, people will see one or two lessons to learn from it. However, I can't reveal the title yet but hopefully in two months time it would be released. We are also planning to return on LTV8 programmes such as Erin Keke among others. Of course I will retain some of the old hands such as Opebe.

I don't over act
May God never let fans depart from one. You see, if you are doing something that the world likes so much, it will get to a stage, some people will begin to look for one's downfall. As comedians, the things we do look absurd. So if you say I am overacting, that is a complete lie. For instance, among Fuji musicians, Alhaji Sikiru Ayinde Barrister's talent is the unique because he sings his songs as the inspiration comes. When I act, they don't give me lines, what I do is to look at the situation and I improvise. It also depends on the kind of director/ producer one is working with, while some may edit out some things others may be confused.

My state of health
May God never allow evil said befall us, when Taiwo Hassan aka, Ogogo was ill, people said many things about him. People fall sick and die everyday but because we are public figures, people tend to blow it out of proportion. Anything that befalls me is my business and not anybody business. People says what they like, I don't care. I am the one who owns the stomach and who knows whether I am hungry or not. Even if I am sick and I lock offer myself in my house, it is nobody's business. A fellow artiste saw me recently and told me that too many artistes are dying and I responded that so are doctors, journalists and indeed every other person are dieing.

Coping with fans
Let us assume that I was given a cow in Ikeja but when I get to Maryland, some fans say I should cut out a part for them and I gave them the head of the cow. When I get to Anthony, I gave them the legs but by the time I got to Ebute Metta there would be nothing left. And if those at Ebute Metta demand for a share and you tell them that there is nothing, they start calling you names. Someone saw me the other day and told me that I am adding weight. How many of such comments do I recall, my motor has been damaged before, I have been beaten, I have been mobbed. Whenever I go to Mecca, I am always the last to come down from the plane fear of being mobbed.

How I feel about rumours
I feel real bad whenever I read different rumours about me the papers. When they said I took cocaine abroad, I realized that when I am in America, people in London would say I do cocaine. When I am in London, those in America will carry the rumour. They will say all sorts of things. But I 've come to realized don't shout nobody will know that I am alive but when they shout people would know that I am alive. One way or the other, it has increased my fame.

Between me and Omoladun Kenkelewu
There is no fight or division between us or in our home. I can even call her for you. If there is anything between us, why should I hide it.
Although we are both comedians, we are very disciplined. In fact if you come to my home, you won't like me because I am very strict. It is not the way we behave on screen that we live at home. Of course, if you pay us a visit, you will definitely laugh. But when it comes to serious issues, we don't compromise on that. I like things to be in order when I am at home. We have been together for 16 years. On whether I am a better comedian than she is, I would say she met me in the business of comedy. She is good in her own right and I can hold my own. There is no competition. If we meet on set, we behave as if we don't know each other but afterwards, we become would husband and wive again.

Mr. Latin and I
Mr Latin and I can never compete. In fact, there is no basis of comparism between us. I have been in the limelight for more than 15 years before he came on stream. If he comes here, he would postrate to me. Although, I didn't train him he grew up under the tutelage of one of my protégés. He is doing very well in his own respect and I am holding my own too. Aluwe is different from Ojoge, Ojoge is different from Ajirebi, Ajirebi is different from Tunfulu Dejo.

How I started comedy
I didn't start out as a comedian but those we met in this profession such as Adebayo Salami oga Bello are into serious acting. One day I just sat down and thought that if Baba Sala can do comic movies why can't I do something similar or even better. So I just came up with something and showed the scripts to my colleagues, (Abbey Lanre and Jide Kosoko) and they encouraged me to shoot and that was how we recorded Kotonsibe. When I took it to Gbenga Adewusi, he didn't buy the idea but Corporate Pictures took it up and it blew up. I was in London when they informed me that 40, 000 copies had been moved and extra 20, 000 were being produced. Since then, I have released other movies such as Baba Londoner, Ayoku, Agbefo, Ojo Ale and we are still moving on.

Movie industry
Some younger artistes of today do not allow discipline to reign in the industry today. Recently Jide Kosoko raised the point that public appearances do not allow our industry to grow and that we should limit our appearances. Some of us are not producers, what they are concerned about is the money they would realize. The first thing I do when I produce a movie is critical acceptance not the money. It is after achieving this that I would think of how much I can make from it.