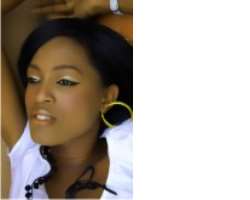 Miss Okhia Marcia with vital statistics 34/26/34 is the first runner-up of Nigeria Next Super Model 2008. She spoke to Harry Idoro, Jnr. on her experience and how she wishes to get to the top of her carrer.

I am Okhai Marcia, I am 20, and I am the 1st runner up, Nigeria's Next Super Model 2008. I am the last out of five girls; my mum is a strong catholic. Growing up was fun, I grew up with my sisters without a boy. I grew up to be disciplined and with the fear of God. I am from Esan Central Local Government Area of Edo State.

What about your educational background?

I have a diploma in computer science from the University of Abuja.

What are you presently doing?

I am based in South Africa, and modelling is what I do now.

How would you describe the event that made you first runner-up?

It was fantastic, it went well, though I was a little bit scared at first, I later boosted my courage. The competition was planned by Mrs Joan Okorodudu, a designer. She has a clothing line here in Nigeria and also in South Africa. So, she's the one that actually organised the competition. She has actually been a God sent to up and coming, as well as aspiring models, because with her you can go places.

Eh, it happened when Agbani Darego won Miss World competition; before then I didn't know anything about modelling or beauty pageant or whatever, but that night when I saw that Miss Nigeria won, I said okay, one of us can really, really do something great and inspiring. After that, two weeks later, I started watching fashion shows and I became interested in it. I just knew that I wanted to be like those girls on the catwalk. I then started rehearsing and practising on my own, but my mum refused because I was quite young, I think I was 13 then. She said “what do you even know you are doing.” She didn't let me be what I wanted to be until when I had to really prove to her that modelling was not what she really thought it was.

So, would you say she inspired you?

I would say yes and no; yes because I never knew anything about that, and when I watched it it was, Okay. But, if you really watch Miss World, it is not the modelling world. So, after Agbani won, I said okay I want to be this. But few weeks after, I saw a different thing on TV, which was just showcasing clothes, and that was when it dawned on me. It was after the modelling show that I started cat-walking, but when I watched Agbani, I just had the interest. I would actually say, yes, she inspired me, because it was her competition that sowed that seed of modelling in me.

What were the challenges you faced initially?

Well, I just started, so far so good, the challenge has been hectic, but with God on your side you can really go through it. However, it is the challenge of you not really having the life of your own. You could actually have a plan A, but your agent tells you, no, your plan A is not good, you are not going here, this is where you are going to. So, the challenge is how to mix your own personal life with your career. It's not easy at all. Like today, I was thinking that I would do a lot of things, but everything has been kept on hold, because of my show that is coming up. That is the challenge, if you cannot manage the two, you would fall. I was actually really getting tensed up, I was wondering, this life, how can I not have a life of my own, how can I not do anything, but I realised that this is what I really want. So, sacrifice is one, you should be able to sacrifice or let go of certain things for your career.

What about your statistics?

Okay, I am six feet tall, bust 34, waist 26 and hips 34. When I was growing up, I never knew I was going to be tall as I was just about 4. 5 feet at the age of 13, but I guess God was on my side. Actually, I didn't have a problem of growing tall, because I knew my sisters were very tall and my mum and dad were tall also. I never had the fear that I was not going to be tall.

For the benefit of those who might want to go into modelling, what is the criterion?

Eh, if you are tall or you have the height and you don't have the passion, I don't think anybody can force you to do what you don't like. So, criterion number one: passion must be there, secondly, you must have the characteristics of a model, one of which is that, at least, you should be about 5.7 feet, with a slim figure. Although in the advanced world, we know modelling does not really have a specific criterion, in the third world countries, for you to be a successful model, there must be certain criteria, except you want to be a Nigerian model and stop here. But if you are really trying to hit the international realm and its market, like the way Oluchi and Agbani did, then you should really have what the world wants, which is the slim figure, the height, don't be too busty, 'hippy,' if you are having too much of the hips or the ass then you should go do some exercises, that could really keep you trimmed. So, for girls who are aspiring to be models, they should ask themselves this question; "am I what the market wants"? because if you are not, you will be wasting your time.

Could you tell us the strength of your fans?

I wouldn't say it's strong, I meet people every day and some of them say they are my fans; I just look at them and laugh. Right now in Abuja, I wouldn't say my fans are strong, but in Lagos I have so many people that are going gaga about me...

For the fact that they see the way I walk, they say I am very good, and they praise my effort on the runway. So, it's growing. I am not up to one year in this yet; I think I have people that are really trying to see me to the top. So, I won't actually say I have fans, because I am doing my job, so why should I bother about fans? It's just the encouragement I get, but I wouldn't say I will walk into somewhere and then see people screaming and fainting like what they do to P-Square, D'banj and Tuface.

It's both sexes, I would say 50:50 because I get women who will say, "my God, you are good," and I get guys that are like "Oh God." So it's balanced as I get the young girls who get my number and call me to say they really want to be models and I get the guys that say I know this particular industry that can help you and all that.

What do you do during leisure?

Do I look like I have one? In fact, I came down to Abuja thinking I could relax, but two days into my vacation I have been called back to Lagos. So, those times that I think I have time for myself, is to wash and then do the things that I kept on hold. But if I do have time for leisure all I would do is sleep.

What are your turn-offs and turn-ons?

Did you see yourself winning?

Yes, I actually saw myself winning until the last minute.

Eh, the girl that won, when I saw her with that figure... it's a modelling show and it is all about how you present a dress. So, the last outfit she was wearing, I was said, "oh my God, if anybody is going to take it from me, it should be Cynthia," and it ended up that way. I saw it that last minute and I got scared.

Did you not have confidence in what you were wearing?

I was, but there are... Okay, put it this way, you get a black skin girl, that is on a low-cut and you already know this is a model, and then you now give her a turquoise blue dress that made her look so gorgeous . Contrasting with her skin colour and the dress, and then you get me that I'm fair skinned and I am wearing green. What do you think the result will be? And then two minutes before the end of the show, they called me as first runner-up. I was so happy for her; because I lost it was to a better person. And I will say this is my first competition and for the first time in Nigeria that I will raise my hands up and will say it was free and fair.

How would you compare the modelling industry in Nigeria to that of South Africa?

I wouldn't want to compare, because in Nigeria, our market is not like the South African market. In Nigeria, we care about material things, I mean the clothes, shoes and our fashion shows are very different from theirs. In South Africa they do know it's a job and they conduct it in less than two hours. But in Nigeria it's a ceremony, when you say you have a fashion show, it takes the whole day. So, if we want to get to the international level, then there are so many things we have to cut down. Moreover, only 30% of Nigerians buys dresses they see people wear; the rest go to the market. But in the outside world, people buy dresses through mobile phones and internet. So, it's two different ways, even though I cannot say that of Nigeria is totally bad because we do it the way we think is best.

What has life taught you so far?

Life has taught me to grow up and manoeuvre so many challenges in life. If you are not a strong person, you will fall and things are not always rosy as we think they are. So, life has always taught me not to "believe the eye."

What do you have time for?

It just started, with time I will be able to make out time. In fact, I left South Africa in September and I am back and about leaving again. When you are about to make a new change in your life, you are always so disorganised before you get things done. I just need to level my ground.

Do you see yourself doing something else outside modelling?

I can't see myself doing any other thing, not even acting because I don't have what it takes, I mean the pretence. So, I think I will just stay with this modelling for now, otherwise on a fashion line.

What do you think is the way forward for Nigerian entertainment industry?

Focus and awareness, we shouldn't be seen as jokers or people that do not know what they are doing. Just like other professions are being taken seriously, so also should entertainment.

When do you think you will be at the top?

Even as a runner-up, it's not bad. I am gradually climbing to the top, but I don't know the exact date. I believe that before the end of this year, with God on my side, it should be a different story. I should be everywhere, like the billboards, not in Nigeria though