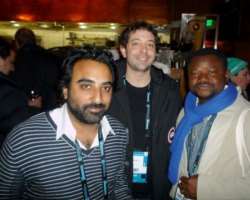 “Asset #82” will have its North American premiere on March 14th at the 2009 South by South West Film Festival in the 24 Beats Per Second section. The film “captures the creative odyssey of Australian drummer Simon Barker in search of his muse, Korean Shaman Kim Seok-Chul—a Grand Master in his seventies who plays with immense energy and complex technique.” The deal, for all North American rights, was negotiated by Emma Franz for In The Sprocket Productions and by Richard Lorber and Elizabeth Sheldon for Lorber HT Digital.

Lorber HT Digital will open “Asset #82” theatrically at select venues in the second quarter of this year, and will also make it available to educational and cultural institutions. After the initial theatrical release, Lorber will release the DVD to the consumer market on its soon to be announced music related label later in 2009.

“In the true tradition of transformative filmmaking, Emma Franz has documented an artist's personal odyssey that results in a universal cultural epiphany,” Richard Lorber said in a statement. “'Intangible Asset #82' is that rare work of alchemy where the power of music and film combine to transform character and transport an audience through art. We expect it to achieve a high degree of critical recognition and find a wide audience.”

Lorber additionally acquired the U.S. theatrical rights and public performance rights to the “Nollywood Babylon,” co-directed by Ben Addelman and Samir Mallal. The film chronicles the world of “Nollywood,” a term coined in the early '90s to describe Nigeria's national cinema, the world's fastest-growing national cinema, surpassed only by its Indian counterpart. The film “delves first-hand into Nigeria's explosive homegrown movie industry, where Jesus and voodoo vie for screen time.” The deal was negotiated by Christina Rogers for the National Film Board and by Richard Lorber and Elizabeth Sheldon for Lorber HT Digital.

“'Nollywood Bablyon' celebrates the power of film to transform a culture and an industry,” said Lorber in a statement. “The explosion of Nigerian cinema over the last two decades is the reclaiming of African story-telling and culture by and for Africans. Nigeria is the new cultural center of Africa and Nollywood is the epicenter.”

Lorber HT Digital “acquires, co-produces and markets specialty documentary programming for targeted interest groups via theatrical release, digital delivery, direct-to-consumer DVDs, and traditional retail video distribution as well as to the educational market.” Its content specialty is “'transformative' programming centered in the domains of spirituality, consciousness, culture and the frontiers of science.”