I never would have married Fela, even if he’d asked — Kendi, ex- Egypt 80 dancer 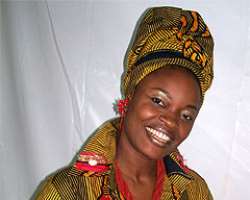 Until his death in 1997, Fela Anikulapo Kuti was an unredeemable sexist. On stage, he was not a saint. He entertained his teeming fans with such act that seduced his dancers on stage, just as his dancers equally consumed by the euphoria of his music, could go as far as stripping down to their pants to the admiration of their fans.

One of his dancers then, Kehinde, now known as Kendi Hoffman recounts her memorable days with the Afro-beat king. She believed that the legendary Fela was not only a sex maverick, but also, a musician who had a charming personalty, and one that no woman dared to resist. Narrating the circumstances that led to her deserting Fela's band in the 90s, Kendi, now a musician, speak of her upcoming maiden album , a blend of Afro-beat with hip-hop, which is due to hit the shelves in due time.

Read...
How did you start your career in dance?
I used to dance for the late Afro-beat legend, Fela Anikulapo Kuti in the 80's and I was with his group for some years before I finally left in 1994. I danced for him between 1989 and 1992 and I left because of the need to raise my own home. I got married to the same man that impregnated me, while we were on a musical tour to Europe and America.

Heavy with pregnancy, it only behooved on me to quit dance. I left Fela's band in 1994, and that was after we had returned from our overseas tour. Having worked with the legendary artiste, and received tutorials from him, it is now time for me to come out with my own music and style, which I call “Afro-hip-hop.”

And when did your association with Fela begin?
Actually, I used to be a performer in my own right. Back in my native Urhogbo, Delta State, we used to have what we called, the Urhogbo Cultural Group Dancers. This group was made up of family members. And I happened to be one of the dancers then. Even though I was very young, we did go for performances within and outside our domain.

Later, I started going to perform at such places as “Klass Nite Club.” And that was how I came in contact with Fela. He later invited me to join his retinue of dancers, which I initially turned down. But I didn't know how I ran into one of his dancers, Ayele, in Apapa, where I used to perform in the evenings. Ayele now convinced me to join Fela's dance train. Suddenly, I found myself dancing for Fela.

What does it mean to dance for Fela in those days?
Fela was a nice man. He was a genius. Dancing for him was like a voyage for me. And each time, he was on stage, I would be at the backstage understudying how he mixed his music. I got inspired by Fela and some other Nigerian musicians.

Given the number of years you spent with him, what would you say you gained from him?

The music I play today, which I want to give back to society is what I took away from Fela.

Most women that danced for Fela ended up becoming his wives, what happened in your own case?

I met Fela with his chain of women. I guess, he'd had enough women before I came on board. I didn't think, I was going to marry Fela because I never wanted to be his wife. I was just there to do my work, and nothing more than dancing for him. I was about 18 years old then.

But Fela had sexual relationship with virtually all the women that worked with him?

Of course, yes. What can one do under that situation. Sex is a natural phenomenon. When a man and a woman stay frequently together what would you expect to happen-sex. Fela was the kind of man that if he doesn't sleep with you, he would deny you the opportunity of being carried along.

I think, he had this kind of charming personality, such that no one could resist his sexual advancement. At a point, I had to wonder why Fela should be having sex with me almost all the time. Immediately I regained consciousness everything stopped .

While you were with Fela, what would you remember as your saddest moment?

I remembered the series of fights, commotions and reign of supremacy that became the order of the day in Fela's household. The voodoos, and other odd activities that prevailed in his household. Then, Fela's wives used to attack me, but I did not give up. I was about the best dancer that Fela had then. And they were not happy with me.

I travelled round the world with Fela; Europe, America name them. In all these countries that we travelled to, Fela pulled crowd. Outside the shores of this country, Fela did not sleep with me. I thank God for that. But he slept with me, when we came back to Nigeria. It's a natural thing.

Did Fela ever have sex on stage?
Fela never had sex on stage. And if he ever did, it happened after I'd left the band. But I remembered there was one time, I attended one of his shows held at Water park, Apapa, where Fela was flopping his hands into the vagina of one of the dancers openly. I screamed oh!

This bullshit. Actually, what made me to quit Fela's band was the unholy display made by one of the dancers during one of our shows Overseas. We were on stage, when one of us, called Dodo, removed her bra, and her breast was dazzling to the admiration of the white audience. From that moment, my senses returned to me, and I realized that I was in the wrong group.

I wondered what would have happened if my mother were to be in the crowd. While on stage, I used to wear double pants, because I love entertaining fans. Mid-way into the show, I would neatly pull down one of the pants, and threw it to the cheering crowd. But in the process of trying to imitate my action, most of my colleagues would end up exposing their nakedness.

They went too far, and I felt that I did not belong to that place anymore.

In all of these, what was the reaction of your parents?

My mother never liked my association with Fela. She would come to the shrine to drag me out of the place. But I resisted her bulling, while waiting for the right to call it a quit. But when I finally met with my husband, who eventually impregnated me, and later took me as his wife, I did not need anybody to tell me to call it a quit. I met my husband, while we were in a musical tour of Europe and also, in Nigeria. I have been lived with him for 28 years now.

What kind of music do you sing?
I sing Afro-hip-hop, and also, R&B. I am a versatile artiste. I have a touch of Afro-beat in my music.

How many tracks are we expecting in your maiden album?

I have about 10-tracks. My music is an inspirational song. It's all about life. I am giving finishing touches to my album. And hopefully, in the next two months, the album will hit the shelves. In my music, I did not take the path of Fela. I sing for change. My songs dwells on love, happiness and sundry things. Through my music, I want to give hope to the hopeless people.