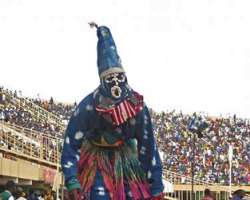 The Nigerian motion picture industry globally known as Nollywood was temporarily and literally relocated to Ouagadougou, the capital of Burkina Faso, for this year edition of the revered Pan African Film and Television Festival of Ouagadougou (FESPACO). The visibility and huge representation of Nollywood at this year's event, which is also the 21st edition and 40th anniversary of the biennial festival, was made possible by Mrs. Peace Anyiam-Osigwe, the CEO, of the African Movie Academy Awards (AMAA). For the very first time in the history of AMAA, which holds in Yenagoa, Bayelsa State on Saturday, April 4, 2009, the Nominees' List, was unveiled in FESPACO, at a very colourful ceremony that was also well-attended. Among the leading stars in Nollywood that flew to Burkina Faso with workaholic Mrs. Osigwe, to witness the event live and further hoist the Nigerian flag higher were: Joke Silva, Afolabi Adesanya, (also a jury member at FESPACO), Chinedu

Speaking briefly at the press conference that preceded the unveiling of AMAA nominees, Mrs. Osigwe, maintained that the new partnership between AMAA and FESPACO, would definitely bring good tidings to the African film and cinema sectors, adding that AMAA would continue to work closely with the organizers of FESPACO and African film professionals. Both events were well attended by African and foreign filmmakers.