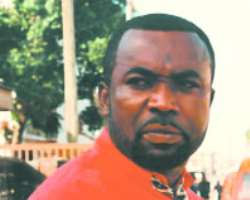 WHAT looked like a typical Nollywood set was re-enacted last Wednesday at the State Police Command, Ikeja GRA were erstwhile president of the Association of Movie producers, Madu Chikwenu,was detained for an alleged threat to the life of film maker Mr. Zack Orji, former president of the Actors Guild of Nigeria. (AGN).

T
he tension generated by the initial drama of the arrest and detention of Mr. Chikwendu was quelled when another filmmaker and producer of Living in Bondage, Mr. Okey Ogunjiofor intervened and posted bail for his embattled colleague.

http://nollywoodgists.com investigations reveal that the trouble started after a shouting match during a meeting of Nollywood stakeholders which had Zack and Chikwendu in attendance.

Mr. Chikwendu was said to have called him names which included that of being a ritualist.

Sources maintain that Chikwendu;s audacity to brand him a ritualist was what actually irked Zack, prompting his move to punish his one time bosom friend with an arrest. But in actual fact there was no threat to his life, as eye witnesses to the quarrel posited.

When http://nollywoodgists.com called at the station, he was told by the District Crime Officer in charge of the case, who pleaded that his name be not mentioned, confirmed the incident, but noted that the issues had been resolved after Ogunjiofor's intervention.

Further probe by http://nollywoodgists.com to get more information from him was shunned as he encouraged that the parties involved in the case stands better chances of explaining themselves.

All efforts to get the two parties involved to comment on the matter by the time of going to press proved abortive.