From Nollywood without Nollywood 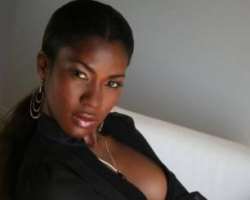 Stephanie Okereke has an aura that makes her likeable. SAMUEL OLATUNJI finds her irresistible and went after her for a one-one-one chat, it was quite revealing.

Your performance in Enslaved was mind-blowing and that was before you went to film school. I wonder what your acting would be now that you're fresh from film school.

You have to wait and see but I know that first of all, acting is a talent. It is just that going to school would make you more aware of different techniques. A lot of people like 'Enslaved' because it borders on issues that affect lots of young girls.

This puts you ahead of some of your colleagues?
Not really. Of course, knowledge is what puts one man ahead of the other. I'll leave that to people to judge but I really don't care about all that. I hope I can challenge people to do better in their acts. The thing about acting is first of all talent before any other thing. People can go to school and still come out as trash. If you don't have the talent, there is no amount of training that can help you. Some have gone to film school and have not done any better. Acting is a talent, training just refines it. Going to school is good but acting should not be limited to school.

Will 'Through the glass' change anything?
I hope so, because there has been lots of reaction about the movie. I actually did a couple of things while in school and lots of people said it was cool and since I went to study to be a director I decided to do something about it. So, I went ahead and did something. Will it change anything? I think it has. It is propelling a lot of people to look into the kind of work they are doing.

Do you have any Nigerian crew?
Yes, I have three; myself and two other Nigerians. One was based in New York and the other was an emerging actress.

May be it is not a Nigerian movie after all.
Where the money is coming from determines the ownership of the movie. As far as the money is coming from Nigeria, it is a Nigerian movie. I had to write within the environment that I found myself. If I bring them down here I will have to write within our environment. It is a Nollywood movie because it is written and directed by a Nollywood person.

What is the story all about?
It's about responsibility, and roles of parents in the lives of their children. It is about knowing that a little word of encouragement could go a long way in shaping the lives of our children. It's about a guy who doesn't want to be responsible. He found a baby in front of his house and all hell was let loose.

How easy was it for you to foot your bill while in school?

I've been working and saving. It is all about planning.

How difficult was it for you to get the foreign stars to act in the movie?

They were excited at first and when they went to google me and saw the amount of work that I've done, they had no choice than to listen to me when I talked. I called for casting and they all came. They left with good impression of Nigeria. Even after my premiere one guy walked up to me and said 'oh Stephanie, you came all the way from Africa to make us look bad'. They could not imagine what was happening. Where I did my premier was where Denzel Washington did his premiere of 'The Great Debater' in 2007 and I told myself that I would love to premiere my own movie there one day and it happened. It shows that if you want something and you are very determined and you go after it, you'll get it. All of them have been calling to say they want to come to Nigeria.

What will happen to acting now that you've gone and trained as a director?

Don't get it twisted, I love acting, it is my first love. I just finished one with Izu Ojukwu in Abuja.

Are you worried this movie will do well on the shelf considering that the market is not doing so well now?

We are already creating lots of awareness so we believe that it will sell very well.

When are you releasing the movie?
It is going to be pretty soon.
How much did you spend on it?
It's just a one-part film. I had to cut it short to 80 something minutes. I am still spending, so I will not be able to tell you the exact amount now.

You look amazing.
I should because I'm young and healthy.
What's the secret despite all you've been through?
My mum always tells me to keep smiling because when you smile you look younger and healthier. Life is very easy it is just that we try to make it look difficult. I have wonderful people around me who make me feel like going on and on. Again, I'm a fighter, I wake up everyday prepared to face every challenge.

Will you still get married again?
Of course, I will, very soon.
How would you want your world to remember you few years down the road?

That is why I'm being careful with what I'm doing today. I want to be remembered as someone that was able to affect people positively.

Are you single and searching?
I am single and enjoying my life.
What's the weirdest proposal you've received from a man?

A man once told me that he has been told in a church after a revelation that I am his wife. I think it is funny when people try to pull that kind of stunt.

With your past experience with a man, will you get married again?

Everybody is not the same so I shouldn't judge everybody same way.