DEFYNE GETS A HANGOVER 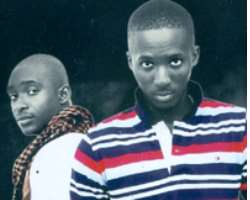 The singing duo of Paul and Peter Okoye may soon be having a good run for their money if what we hear is true of two brothers currently turning up the heat in town.

Emmanuel and George Babatayo with the stage name of Defyne has exploded on the music scene with a hot new single, Hangover currently enjoying massive airplay.

The latest gist coming the duo however is that their new album also called Hangover is ready to be launched.

According to Emmanuel and George who are both graduates of Information Technology from the Open University in the United Kingdom 'We started music professionally in 2006. The album Hangover was produced by Edmond Benson with eight tracks'.

The brothers do not only sing but play the keyboard as well. Their title track Hangover was realized from a Jam party.

Some of the tracks on the album include One of a kind, Beautiful, Superstars, we are flashing and Turn it inside out.