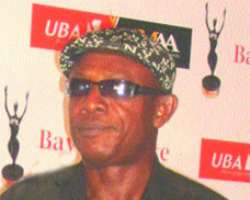 NOT many may know that celebrity screen actor, Nkem Owoh (a.k.a. Osuofiason) was actually heading towards different professions from the silver tube. At one stage... in his youth he was heading to professional football. At another point he was about to commit his life to grease, oils and mechanical drudgery of the engineering workshop.

Despite his wide popularity as one of the leading stars in Nigerian films (Nollywood), many who knew the Enugu State born actor as a lad still wonder why he did not take to playing football professionally. He was good in the sports. As a young man, he knew how to entertain with the round leather. As he disclosed, most of his friends actually thought he was a better entertainer in the field than on the screen as he was good in dribbling and scoring goals.

“The irony of this all is that I was very good in sports and people close to me thought I would go into football. I represented my zone, even my state. It is not until recently that people started to believe that I was not into football. Perhaps if there was career counseling, I most likely would have dropped engineering,” Owoh disclosed.

He added that in his childhood, parents were not keen on the idea of making a career out of acting, sports and other extra curriculum activities since those who took to them were deemed to be never-do-well and those who dropped out of school. So, he went to school to study Engineering in order to please his parents.

However, outside football, the other talent he displayed while in the secondary school was acting. His acting prowess was so pronounced that the Theatre Arts Department of the University of Nigeria, Nsukka came several times to cast him, hence his acting alongside the students of the department. “Acting is a talent to me. It is talent but was something I started getting inclined to early in life. I remember even in my secondary school days, I always got noticed as a child who do drama very well. People always gave me lead roles. I was so good that when I entered the Boys Brigade in the 60s, I was still in drama and was voted head of drama. At secondary school, I was borrowed by the Theatre Department of the University of Nigeria, Nsukka to do one or two things on the campus with them. I was in Vengeance of Heaven and many other plays. So many others came to pick me from my school.”

From all indications he did not choose acting, it was acting that somehow chose him. He recalled how he veered into acting: “I had a tango with Anambra State Broadcasting Service (ASBS), in the old Anambra State and NTA channel 8, Enugu before gaining admission to the University of Ilorin. I have always been acting. When I finished my service at Ogun state, I went back into broadcasting as a stringer, writing for the New Masquerade, Bassey and Company, Tales by the Moonlight, Memorial Hospital and others. I was one of the credited writers then. So, I started with network broadcasting as a writer, because I was shy coming in front of a camera. But somehow across the line what I did behind the scene thrilled people. They started to ask why don't you go in front of a camera and do a bit of comedy. Before then I was into tragedy writing. I was doing romance in some dramas on television . However, since I started this one, comedy, I have not stopped.

“I had no formal training in acting. It was talent but it was something I started getting inclined to earlier in life. It was in Circle of Doom that I cut my teeth in home video. I was actually called to help rescue the script, because the people involved in the film knew me to be a script writer. So, getting close, I was given a part to play, that was the first time in home video.”

To the Engineering graduate from the University of Ilorin, scripts only act as guidelines on set. While acting he explores all facets of his talent. “There is one thing with talent and knowledge. I believe I have the gift from God, I don't think about how to do it. I think about what I am going to do. Am I going to kill somebody? Or am I going to rescue the person or will it be better to kill the person or rescue him?

“Scripts are like guidance, like architectural design, you just see what is meant to be done. What I do basically is to read the script scene by scene and see what is required of me. My prior experience as a scriptwriter has been an advantage. And given the fact that I started on such a high level, I scrutinize scripts a lot. So, in order to avoid conflict, I read through the script, reading through the script you find out that due to inexperience you find out that someone can create a character but while developing the script as the treatment goes he begins to kill the character without knowing.”

Owoh who has also shown his gift in film making, as a producer and in music explained that his hit song, I go Chop Your Dollars is not meant to celebrate scams and 419 but to meet with the demands of the movie, The Master where he initially used it as a soundtrack before producing it into a music album.

“I am so 'anti-419' I have tried as much as possible to talk to the press about my views on scam. I don't like it, and nobody in his or her right sense should not like it. With regards to I go Chop Your Dollars, it was the theme music to the move, The Master. I was not celebrating scamming, it was all in the name of comedy-acting to go with the theme of the song. I was quite amused at the attention the song garnered internationally. In an interview I had in Paris where they kept accusing me of promoting 419, I told them 'no', that instead of them making accusations, why don't they use their resources to investigate me on the 419 thing. Start it from your own end, because if there is no buyer there is no seller.”

Presently, the well-to-do actor who said his greatest fear in life is poverty, is into establishing a film school complete with a studio, with cameras to shoot movies. Already, there are some production companies and television stations that have used the facilities in the school to do some of their shows and studio productions. “My intention was to have about 40-50 students, fortunately or unfortunately the influx was so much that my manager had to register 150 students. So, there was no space to keep the students, although I have now acquired land, and by the grace of God, as money comes in, we will work on making the school bigger and more effective.

“I am not just trying to act, and live, I believe in making a difference, and keeping a legacy, and before I go, I want to make sure there is a good structure in this industry; with the help of some of my colleagues, we can stop some of the hap-hazard things being done, and structure this industry in a way that when people come to visit, they understand that acting is a serious profession, and should be treated with a lot of respect,” he informed.

Since Circle of Doom, Owoh, now in his 50s, has stared in scores of Nollywood hit films, making him well know locally and internationally. He played leads in such flicks as Taboo, Rattle Snake, Yogo Pam Pam, Osuofia in London, and many more. He is also one of the Nigeria's front line situation comedy and stand-up comedy acts.