IF WE DON'T WIN… SIASIA ON ARRIVAL IN ANTANANARIVO 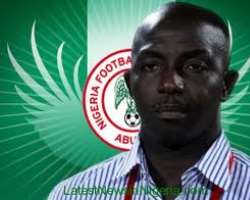 The delegation of 19 players and 13 technical officials, led by the chairman of NFF Technical Committee, Barrister Chris Green, departed from the Nnamdi Azikiwe International Airport, Abuja at about 10.30pm Wednesday night.

Air Nigeria's 96-seat Embraer E-Jet, with Captain Ayegbe Richard in charge, departed at 10.30pm and made a re-fueling stop-over in Brazzaville, capital of Congo, after two-and-half hours. The jet spent only an hour in Brazzaville before the 4 hours and 40 minutes flight from Brazzaville to Antananarivo.

'We want Nigerians to pray for the team, because we have prepared well and we believe it is going to be our day on Sunday. If we don't win the game, said Siasia,' adding in pidgin English, 'if we no win we no go come back here o.'

Midfielder Yusuf Ayila, who was injured in training on Tuesday, did not make the trip to the Indian Ocean island.

At the other end, in Antananarivo, defender Gege Soriola, who plays for Free State Stars in South Africa, arrived in Antananarivo on Wednesday and was in the party that received the delegation at about 9.30am Madagascar time (7.30am Nigeria time) on Thursday morning.

Hours later, forward Ikechukwu Uche, who has scored six goals for Nigeria in four matches since returning from an injury spell in March, flew into Antananarivo aboard a Madagascar Air flight, and was received by the NFF advance party led by Bola Oyeyode, Head of the International Department.

On Thursday afternoon, Captain Joseph Yobo also flew into Antananarivo, to complete a team of 22 players who will battle for shirts for the crucial qualifier against Madagascar on Sunday and the friendly against Argentina in Dhaka, Bangladesh on Tuesday.

US-based midfielder Emmanuel Ekpo is expected to fly to Bangladesh to join the cast for the high-profile friendly.

The Nigeria team is staying at the Hotel Carlton - the only five-star hotel in Antananarivo. The hotel was secured for the team by the Nigeria Football Federation, after the Federation rejected the one booked by the host FA, which was deemed to be sub-standard.

Oyeyode said: 'The hotel booked for our team was sub-standard. We realized that when we arrived here and we had to secure the Hotel Carlton, for the comfort of our players'.

Also secured before the delegation's arrival is a training pitch that would serve the team before they are allowed to train at the match venue, the Stade Municipal de Mahamasina, on Saturday evening. But the team will only start training on Friday morning.

The Air Nigeria aircraft simply dropped off the contingent and returned on Thursday, with another chartered jet scheduled to arrive in Antananarivo on Sunday morning to fly the team overnight to Dhaka, Bangladesh after the match.

Barrister Green is supervising matters until the arrival of NFF President Aminu Maigari, who flies to South Africa from Saudi Arabia, to connect Antananarivo on Friday morning. Green said: 'This is a huge national assignment and we must not fail. I have spoken to the players individually and collectively and they are confident.

'I also believe that the usual Nigerian spirit, which takes us higher than expected in tough situations, will prevail on Sunday'.