MIKEL: I WON'T PULL OUT OF ARGENTINA TIE 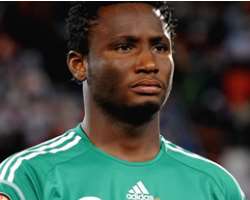 Protesting Chelsea's midfielder, John Mikel Obi, has assured Nigerians that he will not pull out of the international re-match friendly between the Super Eagles and the Argentina national team next week.

There have been intense speculations that some of the players have threatened to opt out of the match billed for Bangladesh, owing to club engagements and the insincerity of the Nigeria Football Federation (NFF) in hastily arranging another friendly with Lionel Messi-propelled side without allowing them to celebrate the humiliating victory against the Argentines in Abuja recently.

However, commenting on it while fielding questions from the reporters during a brief interaction at the National Stadium Abuja, Mikel admitted that though he discussed it with the management of his premiership club, he decided to be part of the game as part of his renewed commitment to the national team.'We spoke about the match against Argentina and the possibility of playing the two matches in my club with my club, but I have decided to be part of the Argentina friendly.

It is part of my decision to show everyone how committed I'm to the national team now.

'I want to hopefully play the two games but I attach more importance to the game against Madagascar.

I can't imagine an African Nations Cup without the Super Eagles participating. As I promised, I want to be part of the team to prosecute the two matches and make sure we get something very positive out of them,' Mikel assured.

Mikel had earlier expressed sadness over the injuries depleting the team, admitting that: 'The injured players are going to be of much concern to all of us because they are essential part of the team.'

'I heard that Taye Taiwo is injured and I know his absence is going to be a massive setback to the team.

We are going to miss him, but the good thing is that we have many other players to replace those who cannot make it, owing to one problem or the other. Their absence is not going to be an excuse for us not to win in Madagascar,' he assured.